Identity and community are inextricably linked. As one writer recently put it, “Patterns of conduct and virtue exist independently of any individual, and the most important parts of personal identity often emerge not as a result of private thinking but in groups that do and love the same things.”1 We discover who we are not through introspection, but through interaction with others, through community. So identity and community are not a pair of topics, but one intertwined topic. In this issue of Kesher we continue the discussion we began last issue, exploring this unified topic, identity-and-community, within the particular context of Messianic Judaism.

Carl Kinbar opens the discussion with, “ ‘I Will Dwell Among, Them’: The Shekhinah and the People of God in Midrash.” Kinbar delves into a number of classic rabbinic texts that explore the implications of Hashem’s promise to dwell among his people, and goes on to consider texts on the same theme in the Apostolic Writings. The presence of God, the Shekhinah, in our midst shapes community and the individuals who comprise it.

We continue with part two of “Jewish Identity and Faith in Yeshua,” by Jonathan Allen. Part one explored “What Makes a Jewish Identity and Why,” and now Allen describes how the church and various streams within Judaism interact with Jewish identity, and its implications for the Messianic Jewish community. In the next article, Paul L. Saal writes as a congregational rabbi on the idea of “Messianic Jewish Communities by Design: Open Doors and Reserved Seating.” The subtitle reflects the balance between radical welcome and covenantal commitment that’s at the heart of a healthy community. In our fourth major article, Daniel Nessim traces the history of Messianic Judaism in Canada, from its obscure beginnings in the eighteenth century to its current place within the world’s fourth-largest Jewish community.

Two journey papers fill out our picture of identity-and-community. The first is by David Wein, a graduate student at MJTI, who leads Tikvat Israel Messianic Synagogue in Richmond, Virginia, the city where he grew up within its Reform Jewish community. The second is by Joseph Culbertson, a graduate student at The King’s University, who spent a few years in Messianic Jewish congregations as a gentile and provides some penetrating—and appreciative—insights.

We conclude with two book reviews: one I wrote on The Bible, the Talmud, and the New Testament: Elijah Zvi Soloveitchik’s Commentary to the Gospels, a remarkable nineteenth-century commentary on Matthew and Mark by a member of an Orthodox rabbinic dynasty; and the second on Reading Romans after Supersessionism: The Continuation of Jewish Covenantal Identity, by J. Brian Tucker. Henri Goulet provides an insightful review of this volume, third in the New Testament after Supersessionism (NTAS) series. Both books are of particular relevance to the development of Messianic Jewish community and identity. 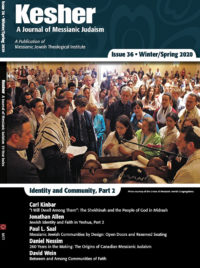 “I Will Dwell Among Them”: The Shekhinah and the People of God in Midrash

260 Years in the Making: The Origins of Canadian Messianic Judaism

Between and Among Communities of Faith

The Bible, the Talmud, and the New Testament: Elijah Zvi Soloveitchik’s Commentary to the Gospels Edited, with an introduction and commentary, by Shaul Magid