Jean-Marie Cardinal Lustiger (1926-2007), a child of Polish-born secularized Jewish parents, was raised in Paris, and, with his family, fled to the south of France (Orléans) during WW II. Tragically, his mother returned to Paris to take care of business affairs, was betrayed by her maid and deported to Auschwitz where she was murdered. Lustiger came across a Protestant Bible as a young adolescent, and, in August of his 14th year, became a convert, a conversion his father unsuccessfully sought to have reversed. His sister also converted. Lustiger and his father were reconciled in the 1970s, and the then Bishop Lustiger made arrangements for the Jewish funeral of his father. He was Archbishop Emeritus of Paris and throughout his life stood faithfully as a witness to Jewish suffering, the elect status of the Jewish people, and to Christ, the crucified. In religiously liberal France, he was known as an excellent communicator and, like close friend John Paul II, modern in his style and traditional in his convictions. He was considered by some to be a logical successor to John Paul, but he demurred for reasons of health.

This compilation brings together a collection of meditations on the Gospel of Matthew delivered to a group of French contemplative nuns, supplemented by a few brief addresses delivered in the 1990s to various Jewish audiences. Throughout, Lustiger demonstrates an unflinching and consistent conviction that Israel is the elect people of God and that Jesus is first and foremost their Savior and Redeemer. Furthermore, without exception, he refers to Gentiles, even Gentile Christians as “pagans,” underscoring that Christian access to the grace of God is always via God’s prior and continuing mercy to Israel. In this book, he explores the ways in which both Israel and the Church need each other, the contours of their respective and collective missions, and ways the attitudes of each community toward the other must change if they are to fulfill their destiny and responsibility to God and to humankind.

In chapter one, “Jesus and the Law,” he argues against seeing Jews and their law as superseded by another code and another people. Jesus is presented as exemplifying and ratifying Torah obedience. God is seen as enabling Yeshua-believers to walk in the obedience of Messiah, patterned after the Law, and facilitated by the Spirit.

In chapter two, “The Ten Words,” he shows how God himself exemplifies the righteous requirements of the Ten Words.

In chapter three, “Prophecy Concerning the Life of Jesus,” he examines the Matthean nativity story and the corporate solidarity of Jesus and Israel.

In chapter four, “Prophecy of the Life of the Disciples of Jesus,” he continues by considering the second chapter of Matthew, seeing it as foreshadowing the mission of Messiah, the Church and the final judgment as well as the unity between those who suffer for the Kingdom of God (including faithful Israel), and the kingdom of God and Messiah. Matthew 2 also underlies chapter five, “The Passion of Christ Throughout History,” in which he considers how the Church rejects Messiah whenever it rejects or persecutes Israel, highlighting the solidarity between the sufferings of Israel and those of Messiah.

In chapter six, “In Him, All God’s Promises Are Fulfilled,” he demonstrates how in Yeshua, the Kingdom of God is a present reality among us but in a secret form, not yet fully and triumphantly manifest. Through the gift of the Spirit, Yeshua’s eschatological foreshadowing of Israel’s blessed future is communicated to us. Our foretaste of the age to come is a foretaste of Israel’s prophetic destiny-obedience to Torah, fullness of the Spirit, resurrection of the dead, and regathering of God’s people-all signs borrowed from Ezekiel 36-37.

In chapter seven, “The Hope of Israel,” Lustiger examines the third chapter of Matthew, again countering supersessionism by presenting Yeshua the Messiah as Israel’s hope. The Hebrew Bible is not invalidated by his coming but extended to the pagans through the New Covenant and Messiah, and this is a grace immersed in sufferings now, with glories to follow. We live between the already and the not yet, just as Yeshua was not yet glorified. The passion of Messiah reveals both the measure of our sin and the scope of our forgiveness; we could not bear the knowledge of our sin otherwise. We can then go on in the Holy Spirit, willing to suffer for his name’s sake.

In chapter eight, “Christ’s Passion Reveals the Sin of All,” he explores the mystery of Messiah: Why was it “necessary” that the Messiah had to die? In the account of Messiah’s passion we see representatives of every class of humankind, all demonstrated to be in need of the fruits of his passion. In Messiah, we see the character and depth of our sin. Through this same passion, we are enabled to live a new life in union with Messiah through his outpoured Spirit.

In chapter ten, “Access Through Christ to All the Riches of Israel,” he considers the riches accessible to the pagan nations through the cross of Messiah. Among these he names access to Israel’s history, her Law, her Scripture, her prayer life and festivals, her land, the Kingdom of God, the redemption and repentance. It seems that for Lustiger, these are already the possession of Israel apart from explicit Yeshua-faith.

In chapter eleven, “Facing Israel-The Nations’ Examination of Conscience,” he shows how the Church and the nations are responsible for anti-Semitism and must repent by reaffirming the unique and elect status of Israel, while allowing Israel to be who she is before God. Perhaps then the wound between Israel and the Church will begin to heal. Lustiger hopes for the rebirth of what was lost in the early centuries, a church from among the circumcision.

The final four small chapters consist of brief addresses given to Jewish audiences. In chapter twelve, “Israel and the Gentiles,” he speaks of how Israel must transcend merely national concerns because its election is not for itself alone. In chapter thirteen, “From Jules Isaac to John Paul II,” he examines the contribution of the latter, the heroic reopening of dialogue after 2000 years, post-Auschwitz, the recovery of memory which Auschwitz sought to obliterate, the need for Christians and Jews to continue to find each other and their reciprocal destinies across the table of the Bible, which neither of them ultimately defines, but which defines them both.

In chapter fourteen, “What Can Jews and Christians Hope for When They Meet?,” he shows how Jews remain “other” and “strangers” in the midst of the earth, yet may discover deep commonality with Christians. Through dialogue, both Jews and Christians may and should come to better understand themselves in ways they could not otherwise access. This renewed dialogue promises an unforeseen and salutary fecundity.

In chapter fifteen, “What Do Christian-Jewish Encounters Mean as Civilizations Clash?,” he explores the interwoven/converging destines of Israel and the Church through considering five questions: (1) What do Jews and Christians have in common that may justify their getting closer to each other, and becoming allies?; (2) As Jews and Christians acknowledge what they have in common, will their respective characteristics and identities be threatened by such companionship?; (3) Does this common principle mean anything for humankind as a whole?; (4) Do both Jews and Christians become better able, when they get together, to carry out their specific mission with regard to the rest of humankind?; and finally (5) If such caring for the world does not reflect any ambition to conquer or dominate, how can this universalism express itself completely? Lustiger handles these enormous questions with seemingly effortless grace. He states clearly that God’s call upon Jews and Christians precludes their failing to dialogue and work together. The world needs Jews and Christians to do this, and God commands it.

The book spans nearly thirty years of the author’s life while exhibiting unwavering unity. What strikes me most is his unabashed confidence in the Election of Israel, and how the Church’s destiny is derivative from, and contingent upon, Israel inheriting what the Father promised. This she does through God’s grace in Yeshua.

I needed to step back and ponder this book for quite some time. At first blush, he seems to accord to Israel more of a free pass than seems warranted. However, before rejecting his perspective, one must note that he sees Yeshua from within Jewish space, rather than as an outside option that Israel must either accept or reject. Yeshua remains for Lustiger ever and always the Messiah of Israel and only therefore the Savior of the nations. I am challenged to examine my communal location as I contemplate the mystery of Israel and of God’s grace in Messiah, for so much hangs upon that social location. This is a small book requiring of all of us a big look, offering a window into a mind and soul much larger than most. 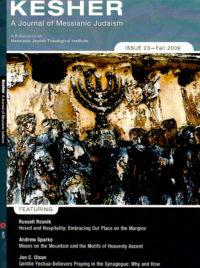 Hesed And Hospitality: Embracing Our Place on the Margins

Gentile Yeshua-Believers Praying in the Synagogue: Why and How

Yet I Loved Jacob: Reclaiming the Biblical Concept of Election