In order to set his approach to hermeneutics in a philosophical base, Sparks reviews epistemology through the centuries. In broad strokes, he defines pre-modern epistemologies as inquiry restrained by the boundaries of tradition.3 Modern epistemologies are characterized by a full-blown suspicion of tradition.4 Finally, postmodern epistemologies he divides into two approaches. Anti-realism views reality as “nothing other than an invention of human culture.”5 Practical realism, on the other hand, sees tradition as a useful tool for grasping reality.6

Sparks locates his stance toward Scripture within the practical realism approach: accepting the creeds of Christianity (tradition) while deconstructing the Bible. And deconstruct the Bible he does. Sparks’ outlook on the Bible is as skeptical as possible. He makes little attempt to harmonize potential conflicts in the pages of the Bible. God’s Word in Human Words excels as a textbook to introduce a Bible reader to every real and imagined problem with viewing the Bible as a truthful book.

Examples of skepticism about biblical literature abound. The Pentateuch is an anthology of conflicting theologies from Israel’s different periods and schools and should not be read as a unity.7 Samuel-Kings is theological-historical fiction embellishing an unknowable legendary core.8 The Chronicler invents episodes to affirm the doctrine of reward and retribution in this life.9 Daniel’s “failed prophecies” are an apocalyptic genre meant to communicate God’s control but not be taken seriously as prophecy.10 John’s gospel uses invented chronology to strengthen the theological theme of Yeshua as Passover lamb.11

For a Messianic Jewish audience, special note should be taken of Sparks’ attempt to explain the Law-free New Testament (as he interprets it) and its relationship to the eternal-covenant teachings of the Pentateuch and other Scriptures of Israel. Sparks suggests it is abundantly clear in the New Testament that Law is no longer part of the obligation of believers. Acts 15:10–11, for example, indicate that living under the Law was a burden none could bear.12 Sparks not only fails to consider that there could possibly be a difference of requirement between Jews and non-Jews, but he also fails to explain how something like a dietary law is more difficult to fulfill than the command to love God wholeheartedly. In what sense has the Law for a Christian become easier to fulfill than it is for a Jew still following Torah? Sparks’ discourse on this point suggests that he is oblivious to the academic discussion of Law and the New Testament. Yet he makes this example of a Law-free New Testament a key example of his own method of dealing with the problems of Scripture.

Sparks’ principle is that the Church “should adopt as its rule of faith not what was last said in the process of inscripturation but that which seems to incarnate Scripture’s highest ideals.”13 Sparks calls his approach a trajectory model. Scripture, he says, brings us through the canon on a trajectory from earlier, more primitive theologies and social norms (slavery, divine retribution, etc.) on a trajectory toward more advanced theologies and social norms (freedom for all people, afterlife theology, etc.).14 The process of theology involves using reason (from natural revelation) and the constraint of tradition (the creeds) to follow scriptural trajectories toward a viewpoint. The process is uncertain just as the possibility of knowledge is uncertain. Humility about the limitations of knowledge is vital and modernist arrogance is largely to blame for evangelical Christian theologies of inerrancy and biblical authority.15

Sparks’ presentation is not particularly systematic, but the following points represent my summary of his view of the Bible:

Essentially, Sparks sees no contradiction or falsehood too big for accommodation except what would contradict a creedal belief. The process of theology is a matter of finding a trajectory on any issue in the Bible, from beginning to end, and correlating natural theology with the movement of biblical thought from primitive beginnings to more mature endings.

In spite of what may seem to be a low view of scripture, Sparks says, “That God speaks inerrantly, and that he therefore speaks inerrantly in Scripture, cannot be doubted by any orthodox Christian.”16 The problem, he claims, is modernism’s over-attachment to certainty that is too uneasy with accommodation of human error in divinely inspired texts. For pre-modern and postmodern readers of Sparks’ type (practical realists), it is not difficult to affirm both inerrancy and the “foibles of human error” in the Bible.

Has Sparks succeeded in producing a constructive approach to the Bible that works? Is his “believing criticism” a satisfactory theory encompassing the phenomena of the Bible, combining faith in its authority with honesty in recognizing its critical problems?

I do not think Sparks has achieved his goal, in spite of a valiant attempt. His acumen for theology is at times questionable. Examples of hasty judgments and immature reflections show through in places. For example, Sparks makes a case that the command to destroy the Canaanites and put them under the ban is not in any way Divine, but is human prejudice found in other Ancient Near Eastern literature being foisted on the biblical reader as if God had commanded it.17 This judgment already is dubious, calling for rebuttal, but it is in the follow-up to the discussion that Sparks’ immaturity really shows. He says that perhaps those who defend the Canaanite genocide as a Divine commandment are the heretics, being guilty of a docetic view of Scripture.18 It is a stunning leap to say that those who take the text as it stands and who are able to grasp theologically God’s authority in judging a nation are in some way denying the human element of Scripture.

Sparks’ analysis of scriptural trajectories lacks depth in many other examples as well. On page 205, he says that God once forbade eating reptiles (Deut 14:8) but now is no longer forbidding reptilian cuisine (Acts 11:4–10). When reading this statement, I wonder if Sparks is unaware of commentary on the visions of Peter in Acts 10 and 11 or if he would actually make a sustained case that the vision was about repealing the dietary laws. The whole example has the appearance of being designed as sympathetic rhetoric aimed at an unsophisticated audience of Christians unaware of issues of Law in the New Testament.

Yet the fatal flaw in Sparks’ view of Scripture is an inexplicable Divine limitation of voice. If God could make his voice heard on the small scale, as Sparks proposes in whispers amid the noise of human error, then why not on the larger scale as in traditional views of the Bible, as trumpet blasts over the voices of imperfect human messengers?

Why would God, for whom history and prophecy are evidently quite important, be constrained to hint at his presence in fabricated historical accounts such as Sparks sees in the Fourth Gospel or Samuel-Kings? Why would not prophecy work? Could God not speak contingently but infallibly through Isaiah? If so, then why would God be obliged to speak through failed prophecies of Daniel and Revelation as Sparks proposes?

The Bible, though Sparks may claim he views it as inerrant, becomes nothing more than a record of human thoughts about God. It seems that God’s voice does poke through here and there, but why is God’s influence over the writers so muted and limited? The limitation of God seems arbitrary, so that one should wonder if God speaks through the Bible at all and if so, could Sparks give evidence of it.

I believe Sparks has some of the pieces of the puzzle right. “Indubitable knowledge” is not an attainable goal.19 Accommodation is without a doubt a scriptural phenomenon. Contradictions and problems do not simply disappear. Yet for the scores of contradictions and problems in biblical literature, there are ten times as many clear windows to God’s being and ways. God has acted in history and has foretold both calamity and deliverance. There is a consistency and plausibility to the biblical view of history and eschatology. So a constructive view of biblical literature, balancing honest critical appraisal with faith in the text as the revealing of God, will be more believable when a theory takes Divine involvement in history and Divine instrumentality in prophecy with the seriousness it deserves. God’s voice in the Bible is not a mere whisper in a room full of noise but the sound of a trumpet playing from Mount Sinai.

Derek Leman is the rabbi of Tikvat David in Atlanta, a father of eight, and Media Coordinator for MJTI. Derek is a blogger and freelance writer, having published nine books, including Feast and The World to Come. 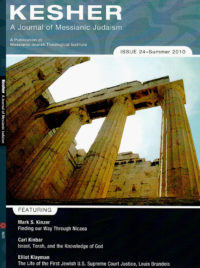 Israel, Torah, and the Knowledge of God: Engaging the Jewish Conversation

Finding Our Way Through Nicaea: The Deity of Yeshua, Bilateral Ecclesiology, and Redemptive Encounter with the Living God

Halakic Authority in the Life of the Messianic Community