In a book about Paul’s vision for how the nations would relate to God’s covenant with Israel, William S. Campbell begins by sketching the history of the successors to Paul’s communities of gentile Christ-followers. Campbell asserts that it was Paul’s intention to cultivate a healthy identity for these congregations, in which they would understand their connection with Abraham, and with Israel, through the Messiah Jesus; and would compare themselves positively with the people of Israel. However, the historical development of these communities did not ultimately follow Paul’s intentions. Many gentile Christians failed to find their place within the symbolic world of Judaism in a way that recognized the unique calling of the Jewish people, and their own unique calling as representatives of the nations. Instead, these early Gentile congregations defined themselves negatively in contrast with the Jewish people. This was the sociological context of the development and entrenchment of supersessionist paradigms in the church.1

After reviewing this history, Campbell investigates Paul’s letters on key points related to how Christ-followers from the nations are to relate to the people of Israel. In chapter five, he analyzes Paul’s repeated statement in Romans 3:22 and 10:12,
, usually translated, “for there is no distinction.” Drawing from other parts of Paul’s letters, Campbell explains that Paul both recognized and valued ethnic differentiation. He argues that the key phrase under consideration might better be translated, “for no distinction is made.”2 It is not a statement about egalitarianism, but is about the equal application of God’s justice, and the equal availability of his mercy. As Campbell writes, “it is a theological affirmation, not an anthropological one.”3

What receives less attention in this chapter is the common Christian view that, while ethnic distinctions exist and are to be celebrated, there is no distinction in terms of God’s expectations for an individual’s behavior. In other words, according to this perspective, Jewish identity should be celebrated, but any sense of obligation to observe distinctive Jewish customs or commands is out of line with the “freedom” of the gospel. In my experience, this latter view is more common today (at least in the Evangelical church of North America) than the more extreme view that Jewish identity itself has been done away with. Campbell has emphasized ethnic distinction in this chapter, since this is the distinction he finds clearly affirmed in Paul’s writings. However, his conclusions about the meaning of the phrase , “for no distinction is made,” are equally applicable to the more specific debate over Jewish versus gentile praxis. Based on Campbell’s analysis, Romans 3:22 and 10:12 are not commenting on the requirements or expectations for the behavior of Jews or Greeks. Instead, they are saying that God’s gift of righteousness and salvation through Yeshua is equally available to the Jew and the Greek who put their trust in him!

Next, Campbell addresses a common Christian interpretation of 2 Corinthians 3—the idea that Paul’s purpose in this chapter is to contrast the new covenant with the Mosaic covenant, which is often referred to as the “old covenant.” Campbell determines that Paul is not in fact contrasting two covenants in this chapter, but two ministries: that of Moses, and that of the ministers of the new covenant, exemplified by Paul himself. An additional contrast is made in the chapter between letters of recommendation and the evidence of the work of the Spirit in the lives of the community members. Following the excellent essay on the topic by George H. van Kooten, Campbell suggests that the Corinthians were likely the ones who initially compared Paul with Moses.4 He concludes that in 2 Corinthians 3, Paul is not exegeting Exodus 34, and is not contrasting the “old” and new covenants. Instead, he is comparing the communities of the gentiles with Israel in a positive way, but is contrasting two methods of receiving divine instruction—by the Spirit, and according to the letter.

Campbell’s goal is not only to understand Paul’s message, or the history of its reception; he points toward a remedy for the church of today with respect to its relationship with Israel. In chapter one, he calls on Christians, for their own sake, not only to acknowledge their “original and ongoing indebtedness to the scriptures and people of Israel,”9 but even to cultivate “a positive relation of indebtedness to Judaism.”10 In chapter eight, in a section on Paul’s letter to the Romans, Campbell writes, “Only a real social and historical link with Jewish Christ-followers has sufficient capacity to constitute the spiritual and social learning that enables the ethne– to learn the ways of the God of Israel.”11 In the context of his earlier remarks, this is not only a historical statement: it is a prescription for recovery. It is unavoidable that we Christians will define ourselves in relation to the Jewish people, positively or negatively. In order to assure both that we avoid the pitfalls of historic Christianity, and also that we position ourselves to receive the blessings available to us, our relationship with the people of Israel cannot be only theoretical or theological; it needs to be social and cultural—real relationship with real, living Jews.

Naturally, the lessons of Campbell’s book will be applied differently in a Messianic Jewish context. Most relevant there, perhaps, is Campbell’s observation that Paul specifically sought to protect the identity of gentiles within the Yeshua movement. Paul, a Jew who fully embraced his Jewish calling and identity, living according to the Torah, recognized that there is an inherent risk for gentiles who belong to or identify with Jewish communities—the risk of losing their own distinctive identity and calling. This has clear applicability for the Messianic Jewish movement of today. As gentiles continue to draw near to the people of Israel in Messianic Jewish settings, it is incumbent on the leaders of those communities to recognize and honor the heritage, culture, and calling of the gentiles in their midst, and to resist the homogenization that can easily occur.

The most challenging part of Campbell’s book, and probably the most ground-breaking, is his conclusion in chapter ten that based on Paul’s letters, gentile followers of Jesus “are not within the covenant,” which remains a covenant between God and the people of Israel.12 Instead, gentile believers are related to Israel through their participation in Christ, and enjoy the blessings of the covenant along with the righteous remnant of Israel through Christ. One of the blessings of the covenant is the opening of the way of salvation through the sacrifice of Yeshua, as the perfect Israelite. Jew and gentile alike are reconciled with God through Yeshua’s work. Yet as Campbell writes, the continued identification of the people of Israel, but not gentiles in Messiah, as within the covenant, “is important because the covenant is the identity-forming agent for Israelites and this continues alongside their participation in Christ.”13 Furthermore, just as it is necessary for the remnant of Israel to exist, it is also necessary for followers of Jesus from the nations to exist as gentiles in order for God’s promises to Abraham, Isaac, and Jacob to be fulfilled—namely, that through them and through their offspring, all the families of the earth would be blessed (Gen 12:3).

One difficulty with Campbell’s understanding of Paul’s teaching on this point is: If gentiles “are not within the covenant,” in what capacity do they join in the Lord’s Table, about which Paul quotes Jesus as saying, “This cup is the new covenant in my blood” (1 Cor 11:25)?14 The celebration of the Lord’s Table has traditionally been understood within the church as a powerful sign of one’s inclusion in the new covenant. It has furthermore been the belief and experience of Christians throughout the centuries that the promise of the Holy Spirit mentioned in the key new covenant passage, Ezekiel 36:27, “And I will put my Spirit within you and cause you to walk in my statutes,” has also been extended to them, a circumstance to which even Peter testified (Acts 10:27). Just to spell out the difficulty here, Paul instructs a congregation consisting mostly of gentiles (in Corinth) on how to celebrate the inaugural ritual of the new covenant—the Lord’s Table. Then in the very next section of this same letter, he gives extended instruction to these same gentiles on the use of spiritual gifts—gifts of the Holy Spirit, who was poured out first on the remnant of Israel in fulfillment of new covenant promises. In the course of that instruction, Paul emphasizes the unity of the body of Messiah, writing, “For in one Spirit we were all baptized into one body—Jews or Greeks, slaves or free—and all were made to drink of one Spirit” (1 Cor 12:13).

Some may suggest that there are two covenants—or perhaps more than two. In that case, God’s covenant with the people of Israel, with its requirements of circumcision, observance of the Sabbath, and so forth, only pertains to the people of Israel, although it was the means of the introduction of the new covenant. But this view is problematic in light of the strong continuity between the descriptions of the new covenant and the Sinai covenant.15 Furthermore, such a view would likely lead into either a supersessionist or a dual-covenant perspective, neither of which is Campbell’s view—he prefers to speak of a “renewed” covenant (in place of “new covenant”), and thus emphasizes the continuity.16 The question then remains: How can gentiles share in the Lord’s table, which Yeshua and Paul portray as signifying the new or renewed covenant, since they are exempt from the fundamental signs of the covenant (circumcision and the Sabbath), along with many of its other obligations? This question certainly deserves further attention from both biblical scholars and theologians.

Overall, Campbell has made an outstanding contribution to the understanding of Paul’s letters—in particular as they pertain to the formation of the identity of gentiles in the Jewish Messiah. His expert exegesis of challenging passages in the letters of Paul will be valuable to scholars and congregational teachers alike. His survey and analysis of the historical development of Christian identity in opposition to or in contrast with the people of Israel is as clear and insightful as it is tragic. His sociological perspective—insisting that the transmission of the historical faith of Israel to the nations must occur through real social relationships—is an invaluable contribution to this discussion. Finally, Campbell’s theological exploration, although it stretches traditional views on the covenant, remains helpful as one seeks to navigate the interplay between Jewish and gentile identities in the Messiah.

4 See George H. van Kooten, “Why Did Paul Include an Exegesis of Moses’ Shining Face (Exod 34) in 2 Cor 3? Moses’ Strength, Well-Being and (Transitory) Glory, According to Philo, Josephus, Paul, and the Corinthian Sophists,” in The Significance of Sinai: Traditions about Sinai and Divine Revelation in Judaism and Christianity, ed. George J. Brooke, Hindy Najman, and Loren T. Stuckenbruck, Themes in Biblical Narrative: Jewish and Christian Traditions 12 (Leiden: Brill, 2008), 149–81. Van Kooten argues persuasively that Paul is engaging in a debate with Jewish sophists, who suggested that physical appearance was evidence of spiritual and mental superiority.

5 Although terms for “remnant” only occur twice in Rom 9–11 ( in 9:27, and 11:5), Campbell considers the remnant of Israel to be a significant theme of the section.

12 Campbell, 305. As Campbell acknowledges, this is a reversal of his own previously held position, as expressed in William S. Campbell, Paul’s Gospel in an Intercultural Context: Jew and Gentile in the Letter to the Romans (Frankfurt: Lang, 1991), 48 and 161–63.

14 All quotations of Scripture are from the ESV. 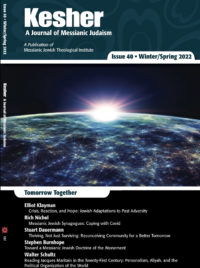 Crisis, Reaction, and Hope: Jewish Adaptations to Past Adversity

Thriving, Not Just Surviving: Reconceiving Community for a Better Tomorrow

Toward a Messianic Jewish Doctrine of the Atonement

Reading Jacques Maritain in the Twenty-First Century: Personalism, Aliyah, and the Political Organization of the World

The Holy Spirit before Christianity, by John R. Levison

The Nations in the Divine Economy: Paul’s Covenantal Hermeneutics and Participation in Christ by William S. Campbell

At the Foot of the Mountain: Two Views on Torah and the Spirit by Joshua Lessard and Jennifer Rosner