Sin separates humanity from God and the world to come. The mystery of salvation lies solely with God who has revealed only one way to enjoy right-relationship with God now and in the world to come. That way is personal, conscious faith (in this lifetime) in Messiah Yeshua as Lord and Redeemer. God is a righteous judge and will judge no one unjustly.

The Scriptures teach that every person, whether Jew or Gentile, stands in need of the atonement for sin provided by God’s grace through Messiah Yeshua’s once-for-all perfect sacrifice; and that since the time of Messiah’s death, burial and resurrection, people receive that atonement only through personal repentance for sin, and faith in Him.

To understand man’s fallen condition and God’s gracious remedy, one can only rely on what God has revealed in Scripture.  Humankind, by design, cannot discern truth about the metaphysical realm apart from God’s revelation. Even Adam and Eve in their pure, elevated and undefiled state, were wholly and completely dependent upon God for insight into the unseen realm of the soul and morality. Our five senses were given so we might learn truth about the physical realm, e.g. fruit trees are beautiful, and fruit is edible. But, these same divinely designed senses fail miserably in determining metaphysical truth, e.g. that eating beautiful and edible fruit is not good and brings death.

In spite of this obvious God-given limitation, our proclivity is to choose our own reason over God’s revelation, which is a core issue at the heart of man’s rebellion against God. Our propensity to choose reason over revelation is why God commands us to wear tzitzit (Num. 15:38-40), warns us of our heart’s deceitfulness (Jer. 17:9), calls us to meditate on His Torah 24/7/365 (Ps. 1), and tells us that His written revelation is sufficient for equipping us for “every good work.”[1] (2Timothy 3:16-17)

In Scripture, God reveals our true nature and condition before Him-sinful and condemned. God’s pre-flood assessment of humanity’s sin-infused spiritual condition (Gen. 6:5) was sweeping in its inclusiveness (“the wickedness of man” = meaning everyone [ital mine]) and comprehensive in its pervasiveness (“was great…every intent of the thoughts of his heart was only evil continually“=  i.e., no innocents). We know that no one was innocent in God’s sight because He judged and destroyed every living being through the flood, with the sole exception of righteous Noah[2] and his family who were exempt on the basis of God’s grace through Noah’s faith (Gen. 6:8; Heb. 11:7). One might hope that humanity’s post-flood condition would be different. But, God deflates any such hope by telling us that post-flood humankind suffers the same defect, “for the intent of man’s heart is evil from his youth.” (Gen. 8:21) With graphic clarity God reveals to us through the flood that all of humanity is “in sin” and stands condemned before Him.

Even after God established His covenant with Abraham and Moses, we see the continual failure of the Jewish people as spoken by Isaiah:

Listen, O heavens, and hear, O earth; for the Lord speaks, ‘Sons I have reared and brought up, but they have revolted against Me. An ox knows its owner, and a donkey its master’s manger, but Israel does not know, My people do not understand.’ Alas, sinful nation, people weighted down with iniquity, offspring of evil doers, sons who act corruptly! They have abandoned the Lord, they have despised the Holy One of Israel, they have turned away from Him. (Isa. 1:2-4)

This is reiterated by Paul:

What then? Are we better than they? Not at all; for we have already charged that both Jews and Greeks are all under sin; as it is written, ‘There is none righteous, not even one… ‘. (Rom. 3:9-10)

This bleak assessment of both Israel and the nations is affirmed consistently throughout God’s revelation (Ps. 14:1-3; 51:5; 130:3; 143:2; Isa. 53:6; etc.), and summarized succinctly by Paul, “for all have sinned and fall short of the glory of God.” (Rom. 3:23) This is not to say that all people are as evil as they can possibly be-but rather that every person (regardless of age, disability, personal piety, or spiritual sincerity) is by nature, from conception, a sinner and justly stands under God’s condemnation. As the Scriptures teach, all people, whether Jews or gentiles, are “by nature children of wrath.”[3]

{josquote}Thus, regardless of age, piety, or sincerity of one’s spiritual aspirations, no one is exempt from God’s judgments, or somehow worthy of God’s forgiveness due to one’s circumstances. {/josquote}

Thus, regardless of age, piety, or sincerity of one’s spiritual aspirations, no one is exempt from God’s judgments, or somehow worthy of God’s forgiveness due to one’s circumstances. Apart from God’s gracious intervention, all are without hope of deliverance. As harsh and as hopeless as this revelation may appear to us, it is the most loving and gracious thing God can reveal. Unaware of our true nature and condition before God, our sin-afflicted hearts would deceive us into believing that somehow someone might be exempt from God’s righteous judgment. Instead, God in His mercy shows us the hopelessness of our situation, thus driving us to Him for deliverance.

Who, therefore, will enter life through the narrow door? Yeshua reveals the answer in a conversation with Nicodemus, a faithful observant Jew. Three times Yeshua tells Nicodemus “who ever believes” in Him will enter into life, namely those who exercise a conscious personal faith in Him as God’s atoning provision. To underscore the personal, conscious nature of what it means to believe in Him, Yeshua points Nicodemus to the example of our ancestors’ deadly experience with the “firery serpents” in Numbers 21, in which we read “if a serpent bit any man, when he looked to the bronze serpent, he lived.” (Num. 21:9) Clearly Messiah wanted Nicodemus to understand that his need for spiritual rebirth came by means of a personal response to God’s provision. This provision, although extremely abundant in its capacity to save, was extremely narrow in that only those who looked to it would live.

Yeshua’s disciples followed their Messiah by teaching the same need for a personal conscious faith response. Perhaps the clearest expression of this understanding comes from the pen of Paul. After quoting the glorious promise of Joel 2:32 “Whoever will call on the name of the Lord will be saved,”[4] Paul reinforces the necessity of people hearing about Messiah by asking four rhetorical questions each demanding “They cannot” as the answer: “How then will they call on Him in whom they have not believed? How will they believe in Him whom they have not heard? And how will they hear without a preacher? How will they preach unless they are sent?” (Rom. 10:14-15a)  To make his point clear Paul says, “So faith comes from hearing, and hearing by the word of Messiah.” (Rom. 10:17) In other words, the faith that leads to life is faith that comes as a conscious response to the truth about Messiah Yeshua in this life.

That if you confess with your mouth that Yeshua is Lord and believe from your heart that God raised him from the dead, you shall be saved; for with the heart man believes, resulting in righteousness, and with the  mouth he confesses, resulting in salvation. (Rom. 10:9-10)

The clear testimony of God’s revelation leads us to affirm that salvation from sin’s penalty, power and ultimately its presence is found only through repentance toward God, and conscious faith in Messiah Yeshua in this life.

Yeshua answered and said to him, ‘Truly, truly I say to you, unless one is born from above he cannot see the kingdom of God.’… ‘For God so loved the world, that He gave His only begotten Son, that whosoever believes in Him should not perish, but have eternal life; For God did not send the Son into the world to judge the world, but that the world should be saved through Him. He who believes in Him is not judged, he who does not believe has been judged already, because he has not believed in the name of the only begotten Son of God.’ (John 3: 3, 16-18)

The Scriptures do not specifically address the eternal destiny of infants, the unborn, or those, who by God’s sovereign design (Exodus 4:11) cannot hear, understand or respond in faith to God’s promise and provision. Is there hope for those who have never heard the good news of Messiah, or those who cannot hear and respond? We answer this question with Gen 18:25, “Shall not the judge of all the earth deal justly?” We desire to emphasize those doctrines which are clearly taught in Scripture and leave the ultimate judgment up to God’s love and mercy toward all people. The Torah counsels us wisely as it says, “The secret things belong to the Lord our God, but the things revealed belong to us and to our sons forever, that we may observe all the words of this Torah.” (Deut. 29:29)

Avram Aumick is a graduate of Concordia Sr. College with major in Biblical Hebrew, has an M.Div. from Concordia Theological Seminary, Ft. Wayne, IN,  and has been a congregational leader of Petah Tikvah, Springfield, IL.
Ralph E. Finley graduated from George Washington University with a degree in Electrical Engineering, and has a degree in General Science from Hampton Institute as well. He is an Elder of Congregation Ahavat Yeshua in Washington, D.C. and holds pastorial ordination under Tikkun International. He received training in then-known “Messiah Yeshiva.” He also sits on the Board of Directors of Biblical Counseling Institute.
Elliot Klayman, M.A., Jewish History, is an Editor of Kesher, and Messianic Literature Outreach, Chairs the Board of Messianic Theological Institute  and is the Associate Congregational Leader of Beth Messiah Congregation in Columbus, OH.
Howard Silverman has been in full-time Jewish ministry since 1980. He has served as the Congregational Leader of Beth Messiah Congregation in Columbus, Ohio since 1991. Educational Background: Graduate Student, The Ohio State University, Near Eastern Languages and Cultures; Advanced Studies Program Diploma, Moody Bible Institute 1980; B.S., State University of New York at Buffalo, 1979.

[1] All scriptural references are to the NASB.
[2] The context in Gen. 6:9 suggests that the righteousness ascribed to Noah, although real and admirable, is ascribed relative to other humans, and was not what exempted him from God’s judgment. The text makes it clear that Noah’s deliverance sprang from God’s favor and grace.
[3] An interesting application of this view of man’s sin-infused condition is that every religious aspiration, every spiritual expression, every attempt to know God, move toward God, seek God, serve God and love God, no matter how sincere, that is not defined by and flows from faith-filled obedience to God’s revelation, is, to one degree or another idolatrous at its root, rendering all such aspirations more worthy of condemnation rather than merit in God’s economy.
[4] Even in Joel we find that the “whoever” to whom salvation is offered is narrowly limited to those who “will call.” 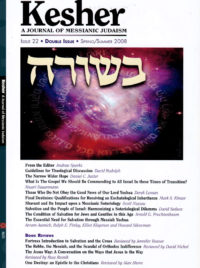 What Is The Gospel We Should Be Commending -To All Israel In These Times Of Transition?

Shavuot and its Impact upon a Messianic Soteriology

Salvation and the People of Israel – Harmonizing a Soteriological Dilema

The Condition of Salvation – For Jews and Gentiles in this Age

The Essential Need for Salvation through Messiah Yeshua

David Brondos, Fortress Introduction to Salvation and the Cross

David Berger, The Rebbe, the Messiah, and the Scandal of Orthodox Indifference

Peterson, Eugene H, The Jesus Way: A Conversation on the Ways that Jesus is the Way

Sholem Asch, One Destiny: an Epistle to the Christians