In Gender Equality and Prayer in Jewish Law, Rabbis Ethan Tucker and Micha’el Rosenberg explore the complex history of the discourses of gender and halakha in Jewish prayer. They provide enough data to challenge what is often the dominant narrative in traditionalist halakhic settings and they offer new ways of framing the discussion of gender and prayer while being anchored in halakhic discourse. New ways of framing make way for the possibility of alternative narratives about what is possible to be done as an halakhic prayer community committed to expanding women’s role in public prayer.

Tucker and Rosenberg are meticulous in drawing on a wide range of texts in their analyses of two specific halakhic topics: women serving as shlichei tzibbur (prayer leaders), and women counting toward a minyan. Their analysis covers the halakhic requirements for any individual to be eligible to serve in these roles, showing that the following are core considerations: issues of individual obligation, communal obligation, and dignity of the community. By limiting themselves to these particular topics, Tucker and Rosenberg have the space to bring a nearly exhaustive number of sources to bear on their conclusions.

One of the things that is significant about the approach of Gender Equality and Prayer in Jewish Law is the authors’ choice to be rigorous in articulating conclusions about the only reasonable interpretations of the halakhic data in these topics, while avoiding being prescriptive in their conclusions about what communities wrestling with these topics ought to do.1 For the latter, they offer possible paths forward, rather than singular conclusions.

For Tucker and Rosenberg, the review of sources on the matter of women’s halakhic obligation to prayer leads them to conclude that women are obligated to prayer (more specifically, the Amidah):

In summary, throughout the classical and medieval halakhic literature, the full and equal obligation of women and men in prayer was maintained without controversy. . . . Women’s supposed exemption from prayer cannot serve as a justification for excluding them from serving as Sha”tz [prayer service leader]. There is no solid basis for any claim that women are, by dint of the fact that they are women, any less obligated than men in prayer.2

Furthermore, the authors show that limiting women’s participation in communal prayer as leaders is rooted in halakhic issues other than personal obligation, namely a) community dignity and b) the appropriateness of members otherwise considered to be social adjuncts leading the whole of the community in prayer. With these considerations, there are two possible approaches toward greater egalitarianism in service leadership and counting toward a minyan:

1) Allow women to serve in these roles in ad hoc situations with specific responsa as textual bases.

2) Engage in a paradigm shift which acknowledges that the classical halakhic category אשה (woman) does not apply to contemporary women.

Tucker and Rosenberg offer the following as a summation of the second approach:

One would need to argue that the term אשה “woman” in classical literature is
sometimes used as a placeholder for a sociological status that women shared with slaves and minors in most times and places in human history. Under that reading, contemporary changes in the status of women have resulted in corollary shifts in their religious obligations such that they now are, through proper application of halakha, maximally obligated Jews.3

Where Tucker and Rosenberg open up their analysis to different possible conclusions is in the area of community practice, given their halakhic analysis. Notice in the above quote, they do not outrightly state that such contemporary changes ought to trigger the corollary shift to egalitarian halakhic obligation to mitzvot. This is even more evident in their conclusions regarding the matter of gender-segregated communal spaces:

According to either model, the delicate questions of whether equality should be played out through gender-mixed practices as opposed to gender-segregated ones can and must be assessed community by community, with great sensitivity to the social context.4

The choice to not promote specific communal norms is noteworthy given the public life of the authors themselves. Rosenberg and Tucker are both educators in egalitarian institutions of Jewish learning whose respective minyanim are gender egalitarian. While in other settings Tucker has consistently shown deference to the possibility of a multiplicity of worthy choices open to halakhic communities regarding egalitarian practice, he has been particularly outspoken in his advancement of the paradigm shift model, offered only as one possible option in Gender Equality and Prayer in Jewish Law.5 In Rabbi Tucker’s role as a leader and teacher he acts as an advocate, while in this context he positions himself as a scholar of the sources, as an advocate for a particular kind of analysis rather than as an unambiguous advocate for particular conclusions in the realm of communal life. While this is an expedient posture to take for the purposes of this book, such a posture has consequences. One of the consequences is that it suggests that these particular halakhic norms can at most be responsive to an already given social context. Tucker and Rosenberg, in positioning themselves this way, end up leaving out a crucial component of their topic: the role in which halakhic discourse shapes the social norms of religious Jewish communities.

While it is likely that Tucker and Rosenberg would be in agreement with the assertion that halakha is a shaper of norms and not only responsive to previously existing expectations, the refrain repeated often through this book suggests that halakha has been responsive to social norms that place women as adjuncts, and can therefore undergo a paradigm shift when women happen to not be regarded as adjuncts in the wider society. But this ignores the ways in which halakha reinforced (reinforces) and perhaps even created (creates) the adjunct status of women in the first place. Tucker and Rosenberg choose to not engage with this dimension of the topic of gender and halakha, and the absence of this engagement diminishes what would have otherwise been a comprehensive exploration of the topics they set out to address. The link between their work as rabbis in the world and the scholarship they bring in this particular book lies precisely in the shaping role of halakhic discourse, and it ought to be treated as an indispensable dimension of the subject.

The strengths of Gender Equality and Prayer in Jewish Law are many. To the degree that Messianic Jewish institutions and communities interact with halakhic discourse, this book is an excellent resource. Messianic Jews can only benefit from a richer and more expansive conversation about the values that underlie decisions regarding egalitarian service leading and/or minyanim. That said, the discourse of halakha is not the fundamental discourse that tends to underlie any decisions made by the vast majority of Messianic Jewish institutions and communities. Even among those that do interact with halakha, halakha is rarely a fundamental discourse that guides decision making. In other words, when a Messianic Jewish community is wrestling with the issue of egalitarianism it will not be enough to look at how its members and leaders understand halakha, although this is important, and Gender Equality and Prayer in Jewish Law is an excellent resource. Messianic Jewish communities must also be willing to explore their relationship to gender norms defined by the Christian communities that shape the worldview of the people who generally constitute their default socio-structural make-up, and the Christian readings of biblical texts that facilitate the replication of those gender norms. This is important regardless of a community’s aspirational claims to be more anchored in halakhic discourse than Christian social norms. For example, a Messianic Jewish community with ambivalence about Jewish men being obligated to mitzvot (as halakhic discourse would define that obligation) cannot coherently exclude women from leading davening on the traditional halakhic grounds that only maximally obligated Jews can appropriately lead the community in prayer. The ground beneath such exclusion is more likely paved by certain Christian readings of the Apostolic Writings and the rest of the Bible.

Given this reality, for the Messianic Jewish community to engage in the kind of reflection offered by Gender Equality and Prayer in Jewish Law, it must also apply the values articulated by Rabbis Tucker and Rosenberg to the other discourses influencing its communal life. A true test of willingness to more honestly engage with the issues of egalitarianism (as well as the important broader questions raised by feminism) will be if Messianic Jewish communities can additionally do with Christian traditionalist social norms what Rabbis Tucker and Rosenberg have done with halakhic discourse. If Messianic Jewish communities can do this work, they will be able to assess and make choices based on clearly identified values.

Additionally, Gender Equality and Prayer in Jewish Law can only serve as a partial model for how Messianic Jewish communities can holistically address issues of egalitarianism and feminism because it does not advocate for particular practical conclusions on the ground. Just as Rabbis Tucker and Rosenberg have done the work of promoting particular positions in the communities they serve, the Messianic Jewish community will need to do the same thing and ensure that its honest engagement with the substantive issues at hand is honored with corresponding communal norms that reflect this engagement.

Finally, the Messianic Jewish movement would also do well to go further than Tucker and Rosenberg. Our very identity requires us to admit that it is a possibility for traditions to have been wrong, since Messianic Judaism challenges such traditional exclusionary discourses as Christianity’s categorical exclusion of God’s ongoing covenant with the Jewish people and Judaism’s exclusion of Yeshua. Thus, Messianic Jews are uniquely positioned to unapologetically assert that sometimes halakha and exegetical norms need to change based on core values discovered in the unfolding of human history. History has provided us with revelation that requires us to depart from traditions that undermine the equal footing of women and men before God, both historically and now. It would be a desecration of the unique position Messianic Judaism has in the world to opt out of the unfolding story of humanity coming closer to realizing we are all b’tzelem Elohim (in God’s image). Tucker and Rosenberg’s excellent scholarship have brought us a little bit closer, and we all need to do our parts as well.

1 It may also be regarded as significant that this book is essentially only addressed to these communities choosing to wrestle with the issue of gender. In other words, traditionalist communities who are not wrestling with the lack of women’s public participation in prayer are not the primary audience.

5 For one of many such examples, see “Ethan Tucker, Egalitarianism in Jewish Law: Pathways for Egalitarian Judaism,” Mechon Hadar, accessed June 13, 2017, https://www.hadar.org/torah-resource/egalitarianism-and-jewish-law. 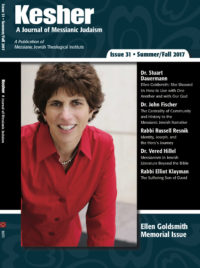