Avivah Gottlieb Zornberg’s volume Moses: A Human Life,1 is both a continuation of her corpus of work as a biblical commentator and a part of the Jewish Lives biography series published by Yale University.

In context of Zornberg’s wider collection of work, Moses: A Human Life is unique not so much in the content itself as in its presentation and voice. As a part of the Jewish Lives series, this book stands apart most notably in the claim that anyone could write a biography of Moses the way one might write a biography of Freud, Scholem, Spielberg, or Rav Kook (just to name a few of the other figures in the series), and by virtue of the fact that Zornberg did not attempt to do so. Zornberg’s work is unlike any other biography one might read, just as Moses is a prophet unlike any other and Zornberg is a reader of Moses unlike any other. Zornberg is able to get to the heart of the pathos and meaning of Moses’ life without doing violence to the sanctity of his position in Judaism, or defaulting to sanctimonious tropes insufficient to address the concerns of those who do not see Moses as uniquely significant (or even as having been an historical person). In other words, Rav Kook, Freud, Scholem, and Spielberg could each find meaning in what Zornberg reveals about Moses. For Jewish followers of Yeshua, Zornberg’s way of reading and expounding enriches our own relationship to Moses, as well as pointing us to a way of revitalizing our relationship with Yeshua’s humanity.

Zornberg begins her biography of Moses by articulating her relationship to the subject of Moses more broadly in her work to date. She also prepares the reader for a journey in which the disclosure—and after-the-fact discovery—of the biographer’s voice facilitates an authentic reading of Moses, rather than being an impediment. In speaking of a bibliodrama exercise she once participated in playing the part of Moses, Zornberg reveals the following experience, and then implications for this book:

In a sense, I was allowing myself—my I—to be read by the text. I was undergoing a harrowing transpersonal experience: exposing myself to the gaze or hearing of the text. . . . In this study of Moses, my I is both absent and present.2

This sets the stage for the book’s content and tone. It is also Zornberg’s invitation to the reader to both read and be read by the text.

Zornberg’s study is split into five essays looking at distinctive yet interrelated facets of Moses life:

2) The role of speech in Moses’ life.

3) The role of hiddenness and revelation in Moses’ relationship with God and the Jewish people.

4) Moses’ family relations: Aaron, Miriam, and Korach (and how they intersect with his relationship with God).

5) What we learn from Moses’ final teaching in Deuteronomy.

Among Zornberg’s most important claims is that to understand Moses one must recognize that his birth and early life happened in the context of a “world of genocide.”3 Most analyses of Moses’ life focus on his relative privilege in relationship to the plight of his people. Zornberg brings this dimension to bear but she explores further depths of meaning through exposing Moses’ traumatic entry into the world. In one sense, many of the challenges and failures Moses faces throughout his life stem from this original violence. Zornberg goes into significant analysis of the relationship Moses has with speech and how this relationship intersects with the larger issue of language (with God, in Egypt, and with the people). Because Zornberg brings diverse observations to her subject without forcing any singular overarching narrative it becomes possible for many grand narratives to emerge. This is important because human beings are multi-storied. Indeed, Zornberg’s central thesis is rooted in a quote from Kafka’s Diaries which appears repeatedly: as a standalone quote before the table of contents, in the final chapter, and as the inspiration for the subtitle of the book itself.

He is on the track of Canaan all his life; it is incredible that he should see the land only when on the verge of death. The dying vision of it can only be intended to illustrate how incomplete a moment is human life, incomplete because a life like this could last forever and still be nothing but a moment. Moses fails to enter Canaan not because his life is too short but because it is a human life.4

Moses’ humanness set in the context of extraordinary and unique circumstances is what makes him significant. It would seem that for Zornberg, it is in Moses’ limitations and unfulfilled hopes and goals that he becomes Moshe Rabbenu—Moses our Teacher. This is both one of the greatest strengths of Zornberg’s biography of Moses, and its greatest limitation: Moses becomes a tragic figure in a kind of archetypal sense. There is no joy or relief or peace for Zornberg’s Moses except for in his death. For all of the effort in emphasizing the human pathos of Moses, Zornberg does not make space for a playful, contented, peaceful Moses. Granted, there is not much in the sacred texts at Zornberg’s disposal to create a robustly happy image of Moses’ life, but it nevertheless undercuts some of the humanity of Moses when tragedy becomes his totalizing identity. This limitation notwithstanding, Zornberg presents the reader with a Moses who can teach us much about what it is like to navigate the challenges of limitedness when faced with the opportunity to encounter the limitlessness of God.

Moses: A Human Life is similar to Zornberg’s earlier works in a variety of ways. Zornberg employs her signature model of commentary which draws from the corpus of traditional Jewish sources (Talmud, Midrash, medieval commentaries, Hasidut, etc.) as well as philosophy (e.g. Levinas), psychology (e.g. Zizek), and western literature (e.g. Kafka, George Eliot). It is also of note that much of the material for this book can be found in two of her other works, The Particulars of Rapture5 (a study of Exodus divided by parasha) and Bewilderments6 (a study of Numbers). Readers familiar with these earlier works will notice that this material is refined, recontextualized, and robustly developed in Moses: A Human Life. I think this is in part because of what makes this work unique in Zornberg’s corpus: it is both commentary and biography at the same time. All of Zornberg’s earlier works have been commentaries on the biblical text and therefore Moses is one (albeit all-important) figure among many, and more often it is God and/or the Jewish people who are central to the analysis. Here, all analysis of others in the text is for the sake of explicating Moses. Zornberg is therefore not in need of fitting her analysis of Moses into the context of a grand narrative of the Torah7 itself (or any particular book within the Torah).

In this context Zornberg is able to dig deeply into Moses the human, and in some ways this book reads as one of Zornberg’s most vulnerable works to date. One profound example of this is in Zornberg’s discussion of the interplay between God and Moses on the subject of silence when faced with inscrutable suffering. Zornberg writes: “Silence is justified, even required, where human life is more and other than we understand it to be.”8 In a sea of meticulously cited ideas from a wide range of texts, Zornberg introduces a profoundly significant statement in her own voice. Looking back at her earlier disclosure about her own relationship to Moses, this is a welcome contribution. Zornberg fully illustrates her place as being among the greatest generative contemporary commentators on the biblical text, not only a redactor, translator, and transmitter of the ideas of others.

For Jews, Zornberg’s book is a refreshing and powerful contribution to the field of Jewish commentary. For Jewish followers of Messiah Yeshua, Zornberg’s approach offers a compelling reminder that what is most deeply human about great prophets and leaders is worthy of attention, and may yield some of the most spiritually significant reflections. The effort to elevate Yeshua’s unique place entails the risk that his humanness—perhaps the most important aspect of who he is—can become an afterthought. Moses: A Human Life reminds us to look deeply into what it means for the human agent of God to come into birth in a world of fear and danger. This is a valuable lesson for those of us who follow a Messiah born in a stable, to parents fleeing to prevent his murder, ultimately lonely even in the height of his popularity, keenly attuned to the suffering of others, and destined for a most brutal execution. What might it be for us to let the pathos of that reality permeate our reading of, and being read by, the Apostolic Witness? 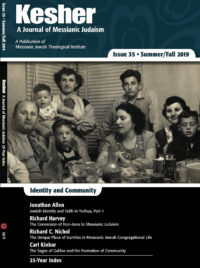 The Conversion of Non-Jews to Messianic Judaism: A Test-Case of Membership and Identity in a New Religious Movement

The Sages of Galilee and the Formation of Community

The Unique Place of Gentiles in Messianic Jewish Congregational Life

Jerusalem Crucified, Jerusalem Risen: The Resurrected Messiah, the Jewish People, and the Land of Promise by Mark S. Kinzer