The post-Holocaust world has been marked by a striking two-way reappraisal between Christians and Jews. The historical events of the late twentieth and early twenty-first century have provided ample fodder for theological reflection (and revision) along these lines. The Holocaust itself brought the plight of the Jewish people onto the center stage of world history, and the subsequent founding of the modern state of Israel raised a whole host of questions regarding biblical prophecy and its fulfillment.

Some of these questions were taken up in the Second Vatican Council, which significantly reoriented Catholic doctrine regarding the Jewish people. New trends in biblical scholarship mirror these developments, as the Jewish context of the New Testament is increasingly considered seminal in unlocking and understanding its full meaning. Finally, the emergence of the Messianic Jewish movement appears to signal the rebuilding of an ecclesial bridge long broken; perhaps even the beginning of a healing of the deepest schism in church history.

While many books have been written on these events and their theological significance, a recent release by Dutch Christian theologian Edjan Westerman deserves particular attention. In Learning Messiah, Westerman endeavors to unveil the collective blindness that has characterized Christian reading of the Bible as it relates to the Jewish people.1 He describes his “living encounter with Israel, its people and country, with living Judaism,”2 an event that commenced his own journey of reading anew Israel’s Scriptures (by which he designates both Tanakh and the New Testament).

Echoing Kendall Soulen’s diagnosis of the church’s flawed canonical narrative, Westerman offers a thorough and thoughtful treatment of “the deep, underlying, foundational relationships between God, His Messiah, and Israel.”3 Also in line with Soulen’s thought, Westerman approaches Scripture through a “creation-consummation” lens, following the trajectory of God’s work through the people of Israel as God’s means for bringing the world to completion. This departs from standard Christian biblical interpretation, which tends to employ a “sin-salvation” lens, often relegating most of the Old Testament and the people of Israel to a mere extended illustration of humanity’s sinfulness and need for a savior.

In an impressive work of biblical theology, Westerman demonstrates compellingly that the coming of Jesus and the New Testament can only be rightly understood as the outworking of God’s covenant with Israel and its particular contours. For Westerman, Messiah’s “enfleshment in Israel” is conceived of as the embodiment of Israel’s perfect avodah, “the totality of a fully sanctified life that is focused on the honor of God.”4 Westerman employs a rich matrix of images and themes from the Tanakh to contextualize Jesus’ coming and its effects.

Westerman’s biblical exegesis is helpfully colored by his adept engagement with traditional Jewish sources, a feature of his work that constitutes a rarity in Christian scholarship. Westerman recognizes that if the Bible is Israel’s Scriptures, “a deep encounter with Judaism and a Jewish reading of Scripture . . . is an indispensable necessity on the path of following Israel’s Messiah.”5 Westerman’s entire framework for understanding Scripture is built upon Hebrew concepts that will undoubtedly ring foreign to the average Christian ear. The use of these unfamiliar terms underscores Westerman’s point that, in reality, Israel’s Messiah is in many ways a foreigner to standard Christian doctrine.

Especially noteworthy is Westerman’s understanding of the intimate link between Israel and Torah. For the Jewish people, Torah has always been understood as a deep expression of God’s love; indeed, the Torah is said to be the ketubah (marriage contract) between God and Israel.

Far too many Christian thinkers have attempted to reflect theologically on the Jewish people without regard to the Judaism that constitutes their covenant faithfulness to God. Sidestepping this blunder, Westerman offers a robust account of Israel’s calling and the reality that “when Israel walks in the ways of this calling, the people will see anew the love of God with their own eyes.”6

Bruce Marshall has likewise argued that the church’s affirmation of Israel’s ongoing covenant with God necessitates an affirmation of Israel’s “special responsibilities toward God, namely to observe Torah, which is incumbent upon them alone.”7 Marshall and Westerman alike recognize and name the provocative conclusion that such a statement entails: the ongoing distinction between Jew and gentile must be recognized as theologically significant.

While Christians have often interpreted verses like Galatians 3:28 as erasing this fundamental distinction, Westerman (again following Soulen) upholds it—and sees God’s redemptive purposes at work through it. He offers a lengthy exposition of the Jerusalem Council in Acts 15, ultimately putting forth an arrangement that sounds remarkably similar to Mark Kinzer’s “bilateral ecclesiology.” Key here is that Westerman, like Kinzer, articulates the ongoing significance of Torah observance for Jewish followers of Jesus. As Jewish theologian Michael Wyschogrod has noted, the Council’s debate about whether gentile followers of Jesus are required to undergo circumcision assumes that “circumcision and Torah observance remained obligatory for Jewish Jesus believers.”8

In the end, Westerman’s perspective carries weighty ecclesiological implications. For Christians, Westerman asserts that “we must learn to confess that we did not live in accordance with what we at the deepest level were and are meant to be: co-sharers in Israel’s salvation, and that we have hated and rejected those who were and are loved by the Holy God.”9 On the flip side is God’s safeguarding of the people of Israel in Messiah, who shares “in the exile and pain of all Israel.”10

Using imagery from the life of David, Westerman conceives of Christology in terms of the “Hebron-kingship” (i.e., the “already”) and the “Jerusalem-kingship” (i.e., the “not yet”). While Messiah is already the “exalted Anointed One,” he is also still a “King in Exile.”11 Recalling the vision in Ezekiel 10 in which the glory of God departs from the Temple—and joins the people in exile—Westerman posits that Jesus likewise dwells with his people Israel in the midst of their dark years of exile.

This claim is far-reaching: “the codification of tradition in the Mishna and later the Talmud, the further development of rabbinic Judaism, the rise of Jewish mysticism and Chassidism, but also Zionism (both secular and religious), have in some way or another…a place in the mystery of the Messiah’s connection to the whole of Israel.”12 Again, Westerman identifies and endorses an important—and controversial—conclusion. To say that God has been providentially guiding the history of the Jewish people in some sense requires an endorsement of rabbinic Judaism as the system that delineates the contours of Israel’s life in a templeless state of exile. In the aftermath of the parting of the ways, rabbinic Judaism offers the only continuous tradition of Jewish life. Westerman aligns here with the perspective in Mark Kinzer’s recent book Jerusalem Crucified, Jerusalem Risen. Speaking of the church (ekkle_sia) and the Jewish people, Kinzer writes, “the message of the crucified and resurrected Messiah of Israel is transmitted and received only through both communities and both traditions,” and “the history of post-70 Judaism displays vivid signs of providential oversight.”13

The implication is that, in the midst of their denial of Jesus, the rabbis have indeed preserved the very lifeblood of Israel’s covenant before God. In many ways, the ability to affirm this paradoxical reality is the litmus test for the depth of Christians’ commitments to upholding Israel’s covenantal status. Likewise, the extent to which the identities of both Israel and the church fail to perfectly reflect the will of God is largely a product of each community’s historical self-definition in contradistinction from the other.

Westerman also recognizes yet another oft-dismissed linkage, namely that a robust affirmation of the election of the people of Israel entails an affirmation of the election of the land of Israel as well. Here his biblical analysis unearths the deep, ongoing, and indelible connection between God’s covenanted people and their promised land. As Westerman recognizes, this connection has everything to do with the city of Jerusalem and the historical and theological function of the Temple. Understanding the fullness of Jesus’ priestly role necessitates an understanding of Israel as a “kingdom of priests” whose mediation is ultimately in service of the whole world.

“Within the prevailing orthodox Christology based on the traditional canonical narrative, there is in fact no connection between Christ and the land promised to Israel,” Westerman writes, arguing that this posture results from a “de-Jew-ized Christology.”14 For Westerman, the incarnation as God’s enfleshment within the people of Israel reaffirms that “Israel’s election and calling are completely assumed and confirmed. The manner of God’s dealings with Israel remains valid.”15 Construed as such, the incarnation upholds and reinforces the strong connection between Messiah and the land, and Westerman provides a helpful engagement with key anti-Zionist Christian thinkers and offers a brief sketch of what Christological reconciliation will entail. Westerman thus joins Christian scholars like Nicholas Brown in counteracting a “Jewish and political Jesus that is oddly alienated from a major component of his own historical, socio-political and theological context.”16

Westerman’s work highlights the fact that the church’s task in rethinking its theological mainstays is formidable. As Soulen explains, “just as a flaw in the heart of a crystal distorts all of the light that passes through it, the logic of supersessionism has tended to distort the doctrinal patterns of Christian thought in ways that have hindered areas of Christian discipleship far beyond the church’s posture toward Israel.”17

What is needed is not merely a Christian rethinking of its doctrine of Israel, but rather a thoroughgoing reassessment of all of Christian theology in light of God’s enduring covenant with Israel. Westerman has shown himself to be an important voice pointing the way forward in this sweeping endeavor. Like Mark Kinzer, he offers not only significant elements of a thorough recasting of Christian theology in non-supersessionist terms, but also a much-needed assessment of the implications of such a recasting. Hopefully their work is merely the first fruits of a new theological era.

This review is based on Jennifer M. Rosner, “Rediscovering Israel’s Messiah,” in Pro Ecclesia: A Journal of Catholic and Evangelical Theology, 30:1 (Feb. 2021).

16 Nicholas R. Brown, For the Nation: Jesus, the Restoration of Israel, and Articulating a Christian Ethic of Territorial Governance (Eugene: Pickwick, 2016), 91. Given the centrality of the land in second-Temple Judaism, Brown writes that “it is quite peculiar then why an eschatological expectation that features so consistently throughout a first-century Jewish worldview and that is of such a vital and integral importance to Israel’s theological, political, and moral gestalt would merit such scant attention, especially amongst those who are quite insistent that Jesus’ words and actions are nigh to inscrutable save for understanding them as the proclamations of a Jewish nationalist working within the framework of a restorative eschatology” (Brown, For the Nation, 10). 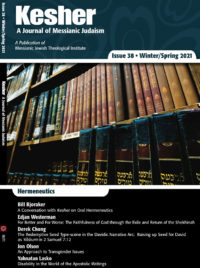 For Better and For Worse: The Faithfulness of God through the Exile and Return of the Shekhinah

The Redemptive Seed Type-scene in the Davidic Narrative Arc: Raising up Seed for David as Yibbum in 2 Samuel 7:12

An Approach to Transgender Issues

Disability in the World of the Apostolic Writings