(Mahwah, N.J.: Paulist Press, 2004. 188 PP.) John W. Miller, professor emeritus at Conrad Grebel University College/ University of Waterloo in Ontario and author of The Origins of the Bible: Rethinking Canon History, 1 has produced a simple proposal with broad implications in How the Bible Came to Be . The latter book was drafted for teachers in a lay Bible study program and revised as a textbook for university undergraduates and graduates.

Miller aims, by understanding the Bible as a theological unity, to oppose Christian triumphalism (i.e., imposing beliefs by force) and supersessionism (that the church has replaced the people of Israel). He argues that the canon was formed in three distinct stages, that the purposes by which it was formed can be known from the people who promulgated each collection, and that the ordering of the canon has theological meaning. He proposes that the church return to using the Bible with its books ordered as they were when the translated Hebrew Scriptures were first bound with the apostolic writings.

The first stage of the canon, according to Miller, was the collection of Deuteronomy, Joshua, Judges, Samuel, and Kings, during the reigns of Hezekiah (2 Kings 18-19) and Josiah (2 Kings 22-23). Characteristic of this literature was the expectation that if the Israelite kings were successful in their reforms, so that Israel was obedient to God’s will as expressed in the Torah, then Israel as a kingdom would be blessed and protected, and other peoples would come to realize that YHWH alone is God.

The second stage of the canon occurred when Ezra and Nehemiah returned to Jerusalem from Persia. Israel was now a people held together through a temple, teachers, and scriptures, but without native king. Israel was called, not as a kingdom but as a blessed people, to be a witness to its God, and to bless the world. During this stage, the books of Genesis-Numbers were added to the front of the Bible, and other books were added in mostly chronological order. The Hebrew Bible took on its form of Torah, then Prophets (Nevi’im), then Writings (Ketuvim) (TaNaK). In this order, the restoration envisioned by the prophets was partially fulfilled in the reforms of Ezra-Nehemiah. Miller also includes in the second stage later additions (Daniel, Esther) during the time of the Maccabees. In his summary, Miller takes a comparatively conservative line regarding canon formation. His innovations here are simply to trust ancient writers more than some modern scholars and to date the closing of the Tanakh early.

The third stage of the canon is the Christian stage. As in the second stage, the existing canonical books were accepted and new books were added. Miller proposes that, as Irenaeus and other church fathers stated, the canon of orthodox Christianity was formed in response to the radically truncated “Bible” and gnostic ideas promoted by Marcion in the second century.

Marcion, and the wider gnostic movement, believed that the creator of the world was not the highest god. This creator, God of the Jews and revealed in their scriptures, was just but not loving. Jesus Christ2 revealed a previously unknown god, whom Marcion called “the Alien.” This higher god was loving, but had nothing to do with the physical world. Consequently, Jesus did not have a physical body, nor was he born of Mary. Paul was the only true apostle of Christ;the other apostles misunderstood Jesus. Marcion’s “Bible” did not include the scriptures of Judaism. It consisted only of a truncated version of Luke’s Gospel, the letters of Paul, also edited, and was prefaced by Marcion’s theology. At the head of Paul’s letters was Galatians, with its proclamation of freedom from both the law and the Scriptures in which the law was given.

Marcion was an able evangelist. At the apex of Marcion’s influence, ca.160-170 C.E., about 40 percent of Christians were Marcionite.

The response to Marcion of what later came to be called orthodox Christianity was to promulgate a Bible by which continuity with the Jewish scriptures and their message was emphasized. There is but one God. The God of Jesus Christ is the creator, the same God witnessed to in the Tanakh. The ordering of the orthodox Bible, approximately as found in the oldest witnesses, was Torah, Prophets, Writings, Gospels, Acts, General Epistles (James, Peter, John, Jude), Pauline Epistles (headed by Romans), Hebrews, Pastorals, and Revelation. Thus, Paul was an apostle, but not the only apostle. The inclusion of Acts, General Epistles, Pauline Epistles, in that order, conveys “the writings of a church united through the leadership of the Jerusalem church of the circumcised.”3

During the fourth or fifth centuries, however, the ordering of books was changed in the Christian Bible. The Prophets were moved after the Writings, implying that the fulfillment of the Prophets was not found in the Writings, but rather, solely in the Gospels. The reforms of Ezra-Nehemiah, by implication, were a dead end. This implied that the church, not Israel, was the heir to God’s promises. What early church fathers had called the Law and the Prophets came to be called the Old Testament. In the Gospel and Apostles, now called the New Testament, the Pauline Epistles were placed ahead of the General Epistles (except in the Bible of the Slavonic church).

When the chronological arrangement of the Tanakh, and the earliest Christian Bible, is appreciated, biblical theology can shift from “being a search for an elusive center among the diffuse traditions” to being “a recovery of the worldview of the collection itself.” But, Miller asks, “Is there anything like a commonly understood, widely shared reading of this story emerging in our time, one that might have the potential of drawing peoples of various traditions together (as did, to some extent, Augustine’s City of God)?”4

The biblical narrative includes the creation story, anarchy, flood, call of Abraham and Sarah to be a blessing to the whole world, the rise of Israel to nationhood, its apostasy and near destruction, the restoration under Ezra and Nehemiah and the New Testament story of Yeshua and the church. One reading strategy portrays the church as the replacement for Israel in its assigned role in God’s plan for blessing the nations. The other strategy views the church “as an extension or manifestation of an Israel that has already begun in some sense to function in that role.”5 Miller argues that the second reading strategy is more consonant with the intention of those who created the Christian Bible.

This approach would view the witness and mission of Jesus Christ as continuous with, and a fulfillment of, the mission and hopes of that Israel which from the time of the reforms of Ezra-Nehemiah had divested itself of the aspirations of being a powerful, restored Davidic kingdom and was content instead with fulfilling the promise of being a blessing to the world through a less domineering, more servantlike, covenant-faithful way of life.6

As Miller intends, I think that his proposal constitutes a natural (and welcome) development beyond the work of others, notably R. Kendall Soulen7 and George Lindbeck.8 For this reader, it is not necessary to accept all the elements in Miller’s reconstruction of canon history (e.g., that Deuteronomy was used as scripture prior to Genesis-Numbers) to accept his main argument.

Useful charts appear throughout the book, and salient points are built upon in logical order. Short passages from ancient authors and documents that support Miller’s argument appear as an appendix. Miller’s short critiques of selected recent studies about canon history form a second appendix. With refreshing lack of apology, Miller makes passing positive comments about the Complete Jewish Bible (a partial correction of the ordering of the canon),9 and writings by Mark Nanos10 and Mark Kinzer.11

In the final chapter “Factoring in Non-Christian Jews and Gentiles,” one section is headed The Way Ahead (Provisional Thoughts) . This boldness, coupled with a disclaimer, may serve as an invitation for readers to deepen and extend the insights Miller presents. 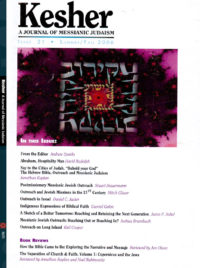 Say to the Cities of Judah, “Behold your God” – The Hebrew Bible, Outreach and Messianic Judaism

Outreach and Jewish Missions in the 21st Century

Messianic Jewish Outreach: Reaching Out Or Reaching In?

John W. Miller, How The Bible Came To Be: Exploring The Narrative And Message

Daniel Gruber, The Separation Of Church & Faith, Volume 1:Copernicus And The Jews