Blessed are those who hear the word of God and follow it. (Luke 11:28 NASB)

Fifty years ago my father, Elliot Klayman, heard the “word of God” and chose to follow it. This unique volume is offered in celebration of the momentous significance that his decision carries for this world and the world to come.

Elliot grew up around the word of God. He was raised in a traditional Jewish family where scripturally-rooted, time-honored, religious Jewish life was among his most formative influences. In 1970, while on a journey in search of abiding fulfillment and meaning in life (rather than evanescent highs), Elliot encountered the word of God in a deeply personal, fresh, yet also familiar way. It happened when he found himself completely lost in a forest in Helsinki, Finland. Although he had already amassed numerous accomplishments in life, at that frightful moment in the woods it became clear to him that his locational disorientation was emblematic of his directionless spiritual condition. As I have heard him say many times, in that instant of desperation, he did the only thing he knew to do: “I cried out to the God of my fathers, Abraham, Isaac, and Jacob.” To Elliot’s surprise, the inaudible yet unmistakable response to his cry for help was the conviction, indelibly etched upon his inner being, that his salvation is found through Yeshua the Messiah. Thus began his journey of following Yeshua as a committed Jew, making Yeshua known as the glory of Israel, and joining with others to build and shape what the world knows today as Messianic Judaism.

Not long after becoming a Messianic Jew, Elliot connected with other Messianic Jews and devoted himself to the upbuilding of what was at that time a fledgling Messianic Jewish community. The far-reaching impact of his leadership over the last fifty years is nothing short of astounding.1 While based in Cincinnati (1970–1977), Columbus, Ohio (1977–2011), and San Diego (2011–Present)—with a few extended seasons in the land of Israel—he has served tirelessly with flagship organizations and congregations such as Jewish Voice Ministries International, Messianic Literature Outreach, Beth Messiah Congregation in Columbus, Union of Messianic Jewish Congregations, Messianic Jewish Theological Institute, and Kehilat Ariel Messianic Synagogue in San Diego. His contributions include teaching, preaching, writing, editing, outreach, advising, mentoring, mediating, adjudicating, executive leadership, and eldership.

Elliot’s imprint among us is all the more extraordinary in light of the fact that it comes in addition to his distinguished career as professor of legal environment of business and a practicing attorney, as well as consistent devotion to physical fitness that includes numerous accomplishments in a variety of sports throughout each season of his life. He is full of vitality and personality. A consummate conversationalist, he is able to talk about seemingly any topic, always peppering a discussion with good questions, perceptive insights, and his widely recognized sense of humor. He is an exceptionally creative thinker, and his creativity often shines through in the form of ingenious practical ways to help people solve complex problems. He has an uncommon ability to lead with vision and pragmatism simultaneously. He is a team player who delights in being knitted into Messianic Jewish community locally and beyond. A quintessential doer, Elliot is unflagging in his drive, energy, productivity, and stamina. He is constantly wearing many different hats and exerting himself in service to God and others. I am confident that many people reading these words can readily recall a tangible way that Elliot has been a blessing to them.

In every circle of his life my father is well-known and well-respected for his integrity, which a half-century of seeking to follow “the word of God” has helped him cultivate.

Once, when I was very young, I found a five-dollar bill on the ground while walking with my father outside of a small grocery store. My father proceeded to explain what seemed to me at the time to be intricate legal and ethical considerations concerning such a discovery. I do not remember the details of his explanation, nor do I remember what ultimately happened with the cash. The unforgettable takeaway that I carry to this day is that personal gain is nothing in comparison to doing what is right—or more specifically what is righteous, good, and godly. That is an eternal truth that my father models because he knows his own life is made forever whole through our Messiah, the one who did not grasp for gain but gave freely of himself in perfect righteousness. As I have heard my father say more times than I can count, “he did it for you, and he did it for me.”

And so with this Festschrift we honor Rabbi Elliot Irwin Klayman (J.D., LL.M., M.A.)ישראל ארץ בן שמואל נחום—who exemplifies the meaning of hearing “the word of God” and following it. A Festschrift is a volume of collected essays written in honor of a respected colleague. The name comes from the German, Fest (Celebration) + Schrift (Writing), plural Festschriften. Festschriften are part and parcel of the world of academia, though they may be unfamiliar to many outside of that world. My father’s bent toward education and scholarship makes the Festschrift a fitting way to honor his semi-centennial year of service to our community. To my knowledge, this Festschrift is groundbreaking within American Messianic Judaism. Perhaps its publication will inspire others within the Messianic Jewish community to celebrate co-laborers through the publication of Festschriften in honor of significant milestones.

The theme of חי (chai) runs through this Festschrift. Chai is, of course, the Hebrew word meaning life. The title, Chayyei Yisrael, means “the Life of Israel.” Yisrael is Elliot’s Hebrew name. The phrase Chayyei Yisrael honors Elliot’s distinguished lifetime of ministry while also celebrating the way that ministry brings life to the people of Israel. The numerical value of chai adds up to the number eighteen. This volume contains eighteen essays written by eighteen different authors. Each author is a high-profile rabbi, leader, or scholar within the Messianic Jewish community who has worked closely in some capacity with my father. The authors span ten different states and Israel, a variety of different congregations, ministries, and institutions, as well as different generations. This attests to my father’s role as a unifying presence among us. The volume is divided into three sections, each containing six essays: (1) Biblical Studies; (2) Jewish Studies; and (3) Community Engagement. The third section covers issues that are relevant and important to my father personally and to the Messianic Jewish community as a whole. To my knowledge, this volume contains the original publication of every essay contained herein. In addition to the essays, there are eighteen different tribute paragraphs, written by eighteen different people who have been profoundly touched through my father’s life. These short testimonials bring a haimish dimension alongside of the high-quality, intellectually edifying, and spiritually enriching essays.

Finally, there are a few people who are deserving of great honor in my father’s life and the production of this Festschrift. Joyce Klayman, my mother, and Elliot’s wife of nearly forty-seven years, has been an ever-present and essential partner. Without her he may have emerged from the woods in Helsinki, but who knows what would have happened next?! Elliot’s grandchildren, Anya, Shai, Lena, and Tali, contribute to his joy while also carrying on some of his admirable qualities. My sister, Rhena, and I can affirm the truth of Proverbs 17:6b: “the glory of children is their fathers.” Rachmiel Frydland ז”ל, thirty-five years after his departure from this earth, remains the most influential scholar-teacher-spiritual leader along my father’s walk as a Messianic Jew. I believe Rachmiel would be humbled by the way Elliot has carried on his work, and that he would heartily approve of the centrality of the scriptures, responsible engagement with Jewish tradition, messianic orientation, and exchange of ideas in this volume. Rabbi Russ Resnik, an editor par excellence, has devoted many hours to enhancing the quality of this Festschrift through bringing clarity, consistency, and structure. Russ has extended to me wisdom and patience throughout my management of the project.

In addition to these named individuals, the entirety of the Messianic Jewish community is worthy of great honor in my father’s life. Perhaps more than Elliot has helped shape this community, he has been shaped by the community. It is therefore fitting that we join together in gratitude to God for this great simcha—Elliot Klayman’s fifty years of ministry.

Blessed are You, Lord our God, King of the universe, who has kept us alive, sustained us, and caused us to reach this season!

1 See Curriculum Vitae, p. 11. This is the first time such an extensive listing of Elliot’s ministry involvements has been compiled. 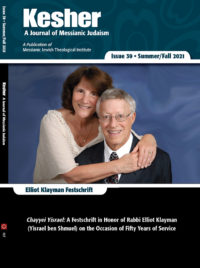 Is Jesus of Nazareth Still King of the Jews? New Testament Christology and the Jewish People

The Wedding at Cana and the Glory of God

The Death of Messiah: Human Agency and Divine Necessity

John 18–19: Esther Redux? Scripture Coding in the Trial and Execution of Yeshua

The Son of Abraham in the First Gospel

This Is My God: Midrash and Multiple Interpretations

Law in Romans: An Interpretive Proposal

Jews, Exile, and the Murashu Archive of Nippur

The Virtue of Hesed

The Temple, the Synagogue, and the Early Yeshua-Community

Humble Uncertainty: A Narrower Path to a Greater Hope

At Starbucks with Edith Stein: A Messianic Jewish Leader Interviews the Famous Catholic-Jewish-Scholar-Saint

Three Influential Jews of the Past and Some Lessons for Today

Bridging the Spirit to the Next Generation

Antisemitism Now and Then