In September 2019 MJTI president-emeritus Dr. Mark Kinzer met with the highly influential Protestant Bible scholar N.T. Wright in a debate sponsored by Beeson Divinity School, Birmingham, Alabama. Their topic was the ongoing covenantal status and role of the Jewish people outside the community of faith in Messiah. The discussion was warm and collegial, despite significant differences of perspective. Journalist Deborah Pardo-Kaplan provides a penetrating report of this event, which marked a new depth of Messianic Jewish engagement with the Christian world.

A few months later, February 2020, the fifth Borough Park Symposium (BPS) convened in New York City to discuss “Jewish Perspectives on Jesus and the New Testament.” This was also a historic event because it brought together Messianic and mainstream Jewish scholars to discuss a topic of shared expertise—not to debate or even highlight contrasting views, but simply to engage and learn from each other. Three articles in this issue are based on presentations from BPS: “‘To the Jew First’: Paul’s Vision for the Priority of Israel in the Life of the Church,” by Messianic Jewish scholar David Rudolph, examines the familiar phrase from Romans 1:16 and various interpretations of the meaning of “first.” Dr. Rudolph contributes a second BPS paper, “A Half-Century of Jewish Scholarship on Jesus,” which is paired with a paper by Dr. Darrell Bock of Dallas Theological Seminary, “Survey of Jewish New Testament Studies Focusing on Jewish Backgrounds: Christian Pro-Jewish NT Studies.” These two articles present both Jewish and pro-Jewish Christian perspectives on Jesus and the New Testament.

Two more articles fill out this issue’s theme. Rabbi Elliot Klayman writes on “The Talmud’s Counter-Yeshua Narrative in Response to the Brit Hadashah,” covering the early and influential portrayals of Yeshua in the Talmud—a significant if troubling Jewish perpective on Jesus and the New Testament. Jonathan Mann, a graduate student in Theological Studies at Duke University, contributes “The Resurrection of Jesus: Another Jewish Perspective,” an in-depth study of The Resurrection of Jesus by Orthodox Jewish scholar Pinchas Lapide.

A final feature article compares the thought of prominent 20th century Roman Catholic theologian Jacques Maritain with the postmissionary Messianic Judaism advocated by Mark Kinzer. Maritain married a woman of Jewish background and was a strong advocate of the Jewish people throughout his career. The author, Walter Schultz, past president of the Canadian Jacques Maritain Association, and former editor of the association’s journal, Maritain Studies, provides a deep and fascinating look at Maritain and his theology.

Books reviewed in this issue are How to Fight Anti-Semitism by Bari Weiss, reviewed by Paul L. Saal, and Sabbatian Heresy: Writings on Mysticism, Messianism, and the Origins of Jewish Modernity, edited by Pawel Maciejko, reviewed by Solomon Intrater. These two books are quite diverse in subject matter and presentation, but equally relevant to Messianic Judaism today, and introduced to our readers in two excellent reviews.

Enjoy this look at Jewish perspectives on Jesus and the New Testament, and beyond! 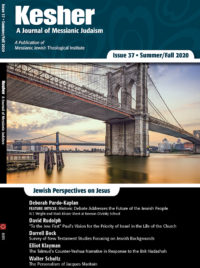 A Half-Century of Jewish Scholarship on Jesus

The Resurrection of Jesus: Another Jewish Perspective

The Personalism of Jacques Maritain and the Postmissionary Messianic Judaism of Mark S. Kinzer

How to Fight Anti-Semitism by Bari Weiss