Hashivenu is a Messianic Jewish theological forum, which operates on the cutting edge of Messianic Jewish thinking. We are pleased to present in this Issue the Hashivenu papers that graced their conference in 2014, plus one paper by Mark Kinzer, the President of Hashivenu, which was read at the 2011 Hashivenu Conference.
The papers contained in this Issue first deal with our responsibility for the earth’s resources, and the animals to whom we have dominion over. Elliot Klayman tackles the tough question of a Messianic Jewish theological and ethical approach to our earth’s physical resources. He constructs a metaphorical Jewish house with walls of prayer, rooms of study and doors of loving-kindness in his approach to the topic. He concludes that we ought to take that which God has given us on this earth and reconfigure it to bless the marginalized, the less fortunate. There are two fine responses and a rejoinder that complete the beginning of this valuable and important discussion.
Paul Saal opens the next series of contributions dealing with our responsibility for the animal kingdom. Along with Dr. Carl Kinbar’s review of Matthew Scully’s book, Dominion, the plight of the animals that we eat is elevated to ethical concern. Two responses to Paul Saal’s paper further frame the moral issue of our “dominion” and add to the gravity of our ethical responsibility. This robust discussion brings us into the realm of animal cruelty, humaneness, vegetarianism, animal profits and our role as priests. Dr. Mark Kinzer’s 2011 paper on “Messianic Jewish Community: Standing and Serving as a Priestly Remnant,” is a fitting capstone to our role and responsibility in the kingdom.
Finishing out the Issue, are two journey papers, one by Dr. Vered Hillel of Israel, and another by Jerry Feldman of Kansas City. Though the journeys are different, they wind up on the same door step, the place where Yeshua resides.
The next Issue will feature Hashivenu’s 2015 conference on Divorce and Re-marriage, which will prove to be a most interesting take away for Messianic Jewish cogitation.

ELLIOT KLAYMAN is not new to the Messianic Jewish world, nor to Kesher, which he has edited and contributed to from its beginnings. He assumes the role of Editor-in-chief for this and the next Issue, awaiting a new crop of younger hands to take over the editorial positions. Elliot also is the Editor of The Messianic Outreach, which is entering is 35th year of publication; is dean of Messianic Jewish Theological Institute’s School of Jewish Studies, and Executive Director of that Institute; heads the Judicial Board of Elders of the Union of Messianic Jewish Congregations where he served as President from 1986-1990; and is a member and sits on the Board of Kehilat Ariel Messianic Synagogue. Elliot has published and spoken widely in various forums. He lives with his wife of 40 years, in San Diego, where he enjoys the outdoor environment and the view from his deck. 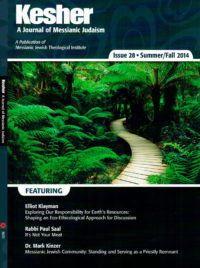