This year Israel proudly marks seventy years as an independent state in the ancient Jewish homeland, and Kesher joins the commemoration with a penetrating look at theological, pastoral, and socio-political issues that come to the fore on this historic anniversary.

We lead off with “The Besorah, Jerusalem, and the Jewish People,” by Dr. Mark Kinzer, which draws upon his recently published Jerusalem Crucified, Jerusalem Risen: The Resurrected Messiah, the Jewish People, and the Land of Promise. This ground-breaking book goes beyond the usual emphasis on texts in the Tanakh to explore the treatment of Jerusalem’s restoration in the New Testament. Jerusalem Crucified, Jerusalem Risen has the same potential to influence theological discussion as Dr. Kinzer’s earlier book Post- Missionary Messianic Judaism. We are proud to introduce Jerusalem Crucified in this issue of Kesher and will follow up with an extensive review in our next issue.

Dr. A. Boyd Luter, Professor of Biblical Studies at The King’s University, contributes the next article, “The Fulfillment of Israel’s Land Promise and Hebrews: ‘Transformed’ or ‘On Hold’?” Like Dr. Kinzer, Dr. Luter explores the treatment of Israel’s land promise in the New Testament, but focuses on one specific New Testament text, the book of Hebrews, in which, he argues, the promise remains in effect but “on hold.”

These two articles are followed by one that I have written, “What Should Messianic Jewish Leaders Say about the Israeli-Palestinian Conflict?” This article develops an ethical and pastoral response to one of the most controversial aspects of modern Israel, its conflict with the Palestinians.. Rabbi Jamie Cowen provides another look at issues related to modern Israel in his report on the 2018 Knesset law, “Israel as the Nation State of the Jewish People.” Rabbi Cowen, an attorney who lives and practices in Israel, provides an incisive perspective on this law, including its implications for the Messianic Jewish community.

Our final article departs from the theme of Israel’s anniversary to respond to a different anniversary, the 2017 commemoration of 500 years since Martin Luther’s posting of his 95 theses on the door of the Wittenberg Castle church. Dr. Richard Harvey provides a Messianic Jewish view of Luther and his anti-Jewish writings.

We continue our emphasis on Israel with reviews of two books by Israeli authors, Jewish Law as Rebellion: A Plea for Religious Authenticity and Halachic Courage by Rabbi Nathan Lopes Cardozo, and A Prophetic Peace: Judaism, Religion, and Politics, by Alick Isaacs.

It’s an honor to participate with this issue of Kesher in the commemoration of Israel’s 70th year, along with you, our readers. Thank you for being part of the story. 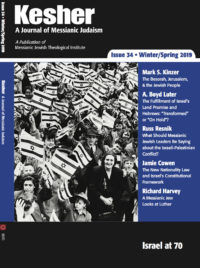 The Besorah, Jerusalem, and the Jewish People

The Fulfillment of Israel’s Land Promise and Hebrews: “Transformed” or “On Hold”?

What Should Messianic Jewish Leaders Say about the Israeli-Palestinian Conflict?

A Messianic Jew Looks at Luther