Our Rabbis taught: Mamzerim and Nethinim will become pure in the future:2 this is R. Jose’s view. R. Meir said: They will not become pure. Said R. Jose to him: But was it not already stated, And I will sprinkle clean water upon you, and ye shall be clean? R. Meir replied, When it is added, from all your filthiness and from all your idols, [it implies] but not from bastardy. Said R. Jose to him: When it is [further] said, will I cleanse you, you must say, From bastardy too… (Kiddushin 72b3).

Evidently these sages had no doubt Ezekiel’s prophecy would literally occur prior to Israel’s Kingdom; their dispute is solely over the purifying effect. This Tannaic debate raises an arresting question when considered in the broader con- text of second-century Yeshua-faith, because by that time supersessionist tenden- cies of non-Jewish Yeshua-believers were well established.4

Could the Besorah of Yohanan ben Zechariah (? ßapt?st??) and Messiah Yeshua also have been based directly on Ezekiel 36:25-27?

It is nothing short of astonishing that modern commentators like Robert H. Stein candidly admit “the origin of John’s baptism is unknown.”5 NT evidence for the source of Yohanan’s rite is admittedly circumstantial at best6 and no explicit citation of Ezekiel 36:25-27 occurs. Moreover, the Church’s long-held creed of a universal water rite virtually eliminates consideration of Ezekiel’s nationally-ex- clusive purification as a literal source of the Besorah. Yet Yeshua-believing Jews, recognizing the legitimacy of long-suppressed bilateral ecclesiology,7 as well as the early effect of supersessionism,8 should have no reluctance weighing the pos- sibility that Ezekiel 36:25-27 is literally the basis for the Besorah.9

This paper explores the idea that Yohanan inaugurated10 Israel’s national purification, “I will throw11 pure water on you and you shall be pure,” and that Messiah inaugurated the superlative Purification12 of Israel, and ultimately of all nations, providing a new heart and a new spirit to all who repent, and giving them the indwelling Spirit.

I will take you from among the nations and gather you from all the countries, and I will bring you back to your own land. I will sprinkle clean water upon you, and you shall be clean: I will cleanse you from all your uncleanness and from all your fetishes. And I will give you a new heart and put a new spirit into you: I will remove the heart of stone from your body and give you a heart of flesh; and I will put My spirit into you. Thus I will cause you to follow My laws and faithfully to observe My rules. Then you shall dwell in the land which I gave to your fathers, and you shall be My people and I will be your God. (Ezekiel 36:24-28) Tanakh, JPS [Emphasis added] 13

To read the entire article, please click the following link to open it in PDF format: 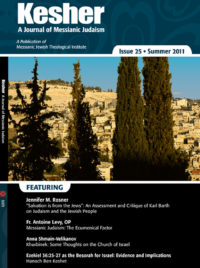