Daniel Shaw is Professor of Anthropology and of Bible Translation at the Fuller Theological Seminary School of Intercultural Studies, Pasadena, CA. Son of missionary parents, he grew up in South India and the southern Philippines. With an M.A and Ph.D. in Anthropology, he and his Jewish wife Karen served for twelve years (1969-1981) with Wycliffe Bible Translators to the Samo tribespeople, former cannibals in Papua, New Guinea. His Ph.D. is from the University of Papua, New Guinea. He has been at Fuller Seminary since 1981.

Chuck Van Engen was born and raised in Chiapas, Mexico by missionary parents. A 1973 graduate of Fuller Seminary, he was ordained by the RCA, and with his wife Jean served with the National Presbyterian Church of Mexico from 1973 to 1985. He received his Ph.D. in missiology from the Free University of Amsterdam, under Johannes Verkuyl. He taught at Western Theological Seminary in Holland Michigan from 1985 to 1988, when he joined the faculty of the Fuller Seminary School of Intercultural Studies, where, in 1997, he was installed as Arthur F. Glasser Professor of Biblical theology of Mission. He is past President of the Reformed Church in America.

The thesis of the book is that contemporary communication of the bibli­cal message can be modeled after the way the writers of Scripture utilized earlier texts and restructured them for their contemporary audience.

[Shaw and Van Engen contradict Bruce Longenecker and others who hold that apostolic exegesis was a unique unrepeatable phenomenon, and agree with Richard Hayes, James de Young, and Sarah Hurty who state otherwise]. Shaw and Van Engen continue, “Communication of the Gospel takes the entire proclamation process (the original communica­tion, the communicators, and the present-day audience) into account. This entire process is impacted by knowing God, which in turn is informed by all of the relevant contextual data. [The] objective in writing this book is to apply theological, communicational, and anthropological principles to the hermeneutical process in order to provide appropriate and relevant messages for the people who hear the word of the Lord.” (2003:xiv)

The book is in three parts, each consisting of three chapters. Part I “Faithful Communication” examines in turn the intent, the source and the message of faithful communication, highlighting God as the actual author whose intent is the transformation of human life through relationship with himself, and whose authorial intent must be respected and not impeded by the communicator. Van Engen and Shaw call for faithfulness to the intent of God’s communication (Chapter 1), the recognition of God as the true source of Gospel communication (Chapter 2), and comprehension of the message that forms the truth of that communication (Chapter 3). Their purpose is “to effectively present what God has proclaimed through God’s Word in ways that will clearly exhibit God’s truth-what God intended human beings to understand and apply in their lives.” (2003:9)

Part III concerns “Relevant Communication,” and speaks of seeking, enabling and pursuing relevant communication. “We seek to communicate the Word of God effectively by remaining faithful to the intent of Scripture,” (Chapter 7) appropriate to the audience (Chapter 8), and relevant in use of media and styles of communica­tion with reference to particular receptors (Chapter 9). This is the application section of the book that projects missiological passion and synthesizes the theological and theoretical issues necessary to bring authenticity and vibrancy to communicating God’s Word to people in a complex world (2003:155).”

{josquote}Shaw and Van Engen highlight how the gospel is living and active and produces a different result in each discrete culture it enters. {/josquote}

The book is mature scholarship, providing lucid and skillful summations of the current state of evangelical hermeneutical theory, translational approaches, and anthropological means of culture analysis. The work is a must-read for leaders in the Messianic Jewish movement because it provides a sophisticated and scholarly grid for developing an awareness and analysis of how all theologies are local, and how the role of the communicator must never be seen as merely transferring his/her knowledge of the things of God to another culture in an understandable manner. Shaw and Van Engen highlight how the gospel is living and active and produces a different result in each discrete culture it enters. In this regard, one might compare each culture to a unique soil, and the gospel to a seed that germinates according to each soil’s uniqueness, producing fruits that vary in accordance with the particular soil involved.

The authors show how Scripture must be interpreted and understood within the context of four horizons: the original author, the original hearers/ readers, the gospel communicator, and the receptors. Each of these horizons separately transforms and impacts perception and incarnation of God’s truth, so that the truth, or the understanding and impact of the truth is never and cannot ever be the same from one horizon to the next. Indeed, the pay-off for the communicator is that his/her own grasp of truth is transformed and broadened though encountering the transforming and transformational response of his receptors. Faithful communicators are also transformed by the very act of struggling to communicate the truth to the receptors. The truth is alive and always new and transformational, even when those changes are subliminal.

This book will disabuse readers from the common assumption that fidelity to God simply requires delivering to others the doctri­nal package committed to us by whatever wing of the Church we have been immersed in-the perception that theology is only a received and preserved deposit to be delivered as wrapped rather than something to be unwrapped and rewrapped by each culture as it uniquely interacts with the life-giving seed of the Word. I would contend along with Shaw and Van Engen that our vision of the truth will be and indeed must be broadened, challenged and trans­formed as we witness its impact and never-before-seen flowering in myriad contexts. Indeed, the Messiah’s teaching does its best work in cultural contexts where the receptors are not passive but active in grappling with gospel newness and what it demands of them. While fundamentalist exegesis often values submissiveness and pas­sivity in the receptors, such a response is more likely to result in syncretism than transformation. Transformation comes in the struggle-wrestling with the Divine in the text as Jacob did at Jabbok and earned the name Israel. “Your name will no longer be Jacob, but Israel, because you have struggled with God and with men and have overcome” (Genesis 32:28).

I found the book most liberating chiefly because it supports the authors’ contention that all theologies are local. The book therefore supports those of us involved in Messianic Judaism developing its own theology. Shaw and Van Engen point out that receptors are not passive, and that their effective response to the message they receive will vary to the degree that the “new truth” being proposed accords with the truths already resident in their own experience and culture. This is especially so of Jews who have been grappling with the Living God and his revelation to us for 3,500 years. When the message comes to us, it finds us already involved in wrestling with the heavenly being and his word of promise and life.

I offer two critiques of the book. The authors are not free of the Church’s tendency to use the Jews as bad examples (see pages 60, 133, and 202, among others). Since I know these authors well and their respect for the Jewish people is unquestioned, I realize these gaffes are inadvertent, and serve as unintended illustrations of one of their major premises: that communicators unknowingly bring their own communal and theological baggage with them in the communication process. Although not a weakness in the book, their text needs reinterpreting in the Messianic Jewish context because of their embedded missionary assumption that communi­cators bring special revelation to target audiences that formerly had only general revelation. This is not true of the Jewish people who have already been recipients of special revelation for thousands of years, and continue today as heirs of a calling to be kings and priests and a holy nation, a people whose wrestling with God did not have to await the blowing of the Church’s whistle.

Stuart Dauermann, Ph.D., is the founder of Hashivenu and rabbi of Ahavat Zion Messianic Synagogue, in Beverly Hills, CA. 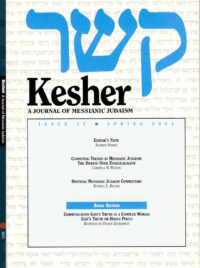 Competing Trends In Messianic Judaism: The Debate Over Evangelicalism