A review by Rabbi Russell Resnik

When I first learned that Walter Brueggemann had written a book opposing Zionism and questioning modern Israel’s claim to the land of Israel, I was troubled. Brueggemann is an outstanding Christian scholar of the Old Testament and a highly credible voice. After I read the book, though, I was a bit relieved, because it’s a rather light piece that evidences a certain unfamiliarity with the Israeli-Palestinian conflict referenced in its subtitle. Of course, Brueggemann’s well-deserved reputation will lend weight to the book, and the included study guide will encourage its use by churches and Bible study groups, so it is bound to be a factor in shaping Christian attitudes toward Israel. For this reason, it has to be taken seriously.

Brueggemann opens with a declaration of “thanks for the founding of the state of Israel and the securing of a Jewish homeland.” But, he says, his enthusiasm for Israel has become overshadowed by Israel’s development of military power and its continued “administrative-military control of the Palestinian territories.”1 He believes that these conditions demand a rethinking of the whole issue of modern Israel and its claim to the land. His rethinking leads to the conclusion that Zionism has turned God’s favor toward Israel and his promise of land into a “hardnosed ideology.”2 But in reaching that conclusion, Brueggemann seems to have developed a rather hardnosed ideology himself.

Early on Brueggemann affirms, “In the Hebrew Bible, Israel is presented as God’s chosen people. It is a core declaration of the text and surely a continuing claim of Judaism. Indeed the Bible makes no sense without this claim.”3 But prior to this salutary remark, in his Acknowledgements, he says that his study has been informed by the work of Naim Ateek and Sabeel Ecumenical Liberation Theology Center in Jerusalem. Ateek denies the relevance not only of the land promises to Israel, but also of the “core declaration” of Israel as God’s chosen people:

In light of their universal fulfillment in Christ, the narrow Old Testament promises regarding the land take on a very transitory and provisional meaning. They are time bound and, in view of their completion in Christ, become theologically obsolete. . . .

There is plenty of Zionist material in the Old Testament where the land is exclusively claimed and the Jewish people are glorified and set above others, and where non-Jews are despised. The New Testament shatters this exclusivity at every turn.4

Brueggemann provides a robust rebuttal of just this sort of supersessionism.

The notion that Christianity has displaced Judaism as the faith of the chosen is rooted in the idea that Judaism was a preparation for Christianity but when Jesus came, Judaism no longer functioned. Such a belief is a historical absurdity and a theological scandal, but it has been a popular idea.5

Ironically, however, Brueggemann does not seem troubled by learning about the Israeli-Palestinian conflict from such an overt advocate of this belief as Naim Ateek.

One outcome of such influence is that Brueggemann portrays a Zionism that doesn’t represent the historical reality of the movement as much as the bogeyman of the Palestinian narrative. His Zionist is a straw man, pieced together and stuffed with some contemporary extreme expressions of the movement. So, for example, “the dominant Zionist appeal to land promises continues to hold intransigently to the exclusionary claim that all the land belongs to Israel and the unacceptable other must be excluded, either by law or by coercive violence. . . . And surely Israeli Zionists want Palestinians to go away.”6

In fairness to Brueggemann, he does define his target here as the “dominant” form of Zionism, or at other times as the Zionist policies of present-day Israel. But he seems to hardly be aware of the broader, historic version of Zionism that accomplished “the founding of the state of Israel and the securing of a Jewish homeland,” and expressly desired to live at peace with its Arab neighbors, including those within the borders of Israel. Indeed, the book never even mentions Arab Israelis, who enjoy rights and opportunities unheard of among most other minorities in the Middle East. This is not to deny that Israel’s Arab citizens sometimes face discrimination and inequity, but that’s a far cry from the exclusionary violence that Brueggemann attributes to Zionism.

This distorted view of Zionism leads Brueggemann to describe the great Jewish philosopher Martin Buber as “no friend of Zionism,” because he looked beyond the promise of land to the goal of “a true community of all men.”7 An attentive reader might be puzzled by Brueggemann’s claim that Buber was no friend of Zionism: after all, not only was Buber one of the founders of Hebrew University and a resident of Jerusalem for many years, but he embraced the Zionist belief in the restoration of a Jewish homeland in Eretz Israel. He lived out this belief, despite reservations about a modern, secular Jewish state.8 Buber’s brand of Zionism, while rare, is not without descendants in the 21st century. Yet Brueggemann is so narrowly focused on his straw-man Zionist that he largely ignores any other variety.

Another evidence of over-dependence on the Palestinian narrative is the general absence of references in the book. For instance, Brueggemann claims that the war of 1967 produced “a hardened Zionism that combined a desperate aspiration with an uncompromising ideology that supported the state of Israel and its security at all costs against all comers.” The phrase “a hardened Zionism” suggests that there might have been a softer version, like the one Buber espoused. But if Brueggemann hints at something beyond his straw man, his critique here remains radically harsh. Readers would be justified in expecting citations to back up his key claims, not to mention some reference to the intransigence of Israel’s Arab enemies with their infamous three Nos after the 1967 defeat: “No peace with Israel, no recognition of Israel, and no negotiations with Israel.”10 As a Bible scholar, Brueggemann is attuned to context and nuance, but as a student of world affairs he seems to have settled for a simplistic, ideologically defined perspective.

In reading Chosen? I felt a bit like I do when I listen to an actor or some other celebrity comment on political affairs. I might respect the actor and even recognize her genius on screen but still find her unqualified to declaim on political matters. I respect and admire Brueggemann as a biblical scholar, but he doesn’t seem to know that much about modern Israel or the history of Zionism. He provides a sharp critique of supersessionism but seems unaware of the radical supersessionism of some of his ideological allies and of the impact of supersessionism on Christian anti-Zionism today.

Still, Brueggemann is right to caution against a dogmatic, non-critical stance toward Israel. Much of his criticism seems directed at the current government in Israel and current trends in Christian Zionism, more than at Israel and Zionism per se, and a weakness of the book is that it fails to make that distinction. One can criticize trends and policies without seeking to invalidate Israel. For me the watershed issue is whether one will explicitly acknowledge the legitimacy of the current state of Israel. If one does, it is not forbidden to oppose specifics of Israeli policy, wish Netanyahu had lost the last election, or advocate for the rights of religious minorities (like Messianic Jews) in Israel.

Brueggeman makes another important point: “The land is given to Israel unconditionally, but it is held by Israel conditionally.”11 I have made a similar point in talks using the alliterative phrase “Promise and Possession.” The land promise to Israel is unconditional and unbreakable, but Israel’s possession of the land depends on obedience to God’s instructions. Brueggemann sees Deuteronomy 28, with its “long recital of blessings and curses” as the “capstone” of the statement of conditions for possessing the land. A close reading of the text itself, however, suggests that the real capstone comes in Deuteronomy 30:1–10. Deuteronomy 28 is framed by two introductory phrases, V’haya im – And it shall be, if. . . .”12 The first, at verse 1, introduces blessings to follow if  Israel obeys all that the Lord commands; the second, at verse 15, introduces the much longer list of curses to follow if Israel fails to obey. Brueggeman’s “capstone” ends with Israel back in Egypt as slaves. Deuteronomy 30:1–10 reverses this tragic end. It opens with V’haya ki – And it shall be, when13 – and goes on to describe exiled Israel’s return to HaShem, the God of Israel, and HaShem’s return to Israel. Translator Robert Alter comments, “The blessings and the curses, presented in chapter 28 as alternatives between which Israel is to choose by its future actions, here occur [in chapter 30] as a historical sequence: first the curse of exile, then the blessing of restoration.”14

Brueggemann emphasizes the conditional aspect of God’s promises and Israel’s failure to fulfill those conditions. He tends to view the unconditional and conditional promises as two streams within the text, originating from different sources, which co-exist in tension with each other. Supporting “the state of Israel as the present embodiment of the land of promise . . . disregards the Deuteronomic if: that the land is held conditionally.”15 Deuteronomy 30:1–10, however, resolves this tension with a vision of Israel and God returning to each other.16 Indeed, the Hebrew word im, usually translated “if,” appears only once in this passage, not to introduce a condition of restoration but to restate the certainty of restoration: “If you be thrust-away to the ends of the heavens, from there HaShem your God will collect you.”17 Though the consequences of disobedience are all too real, they do not negate the unconditional covenantal relationship between HaShem and Israel. Even exile, estrangement from the promised land, occurs within that covenantal relationship and does not undo God’s promise of the land to Israel.

The land promise is in process of fulfillment in our times, and the Jewish people are called to participate in this process through obedience to HaShem and his word. Those who would defend Israel’s land claim with the words of Torah need to remember the ethical requirements of Torah as well, and to recognize how much the state of Israel is an unfinished work. Despite Brueggeman’s rhetoric and the harsher anti-Zionism of Naim Ateek, the return promised in Deuteronomy 30 is still relevant today, a vital factor in the ongoing restoration of Israel to the land – a restoration that helps prepare the way for a wider restoration to come.

10   http://www.cfr.org/world/khartoum-resolution/p14841?breadcrumb=%2Fpublication%2Fpublication_list%3Ftype%3Dessential_document%26page%3D69, (Accessed 1/23/16). This is the Council on Foreign Relations website.

16   See my treatment in Creation to Completion: A Guide to Life’s Journey from the Five Books of Moses (Clarksville, MD: Lederer Books, 2006), 198–202. I note that the verbal root shuv appears seven times in this passage and is attributed alternately to God and to Israel.

17   Deuteronomy 30:4. The Five Books of Moses, The Schocken Bible, Vol. 1 (New York: Schocken Books, 1995), Everett Fox, trans. (emphasis added). Alter translates: “Should your strayed one be at the edge of the heavens, from there shall the Lord your God gather you in. …” 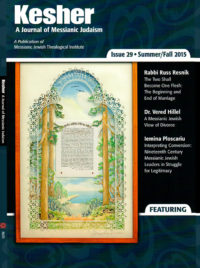